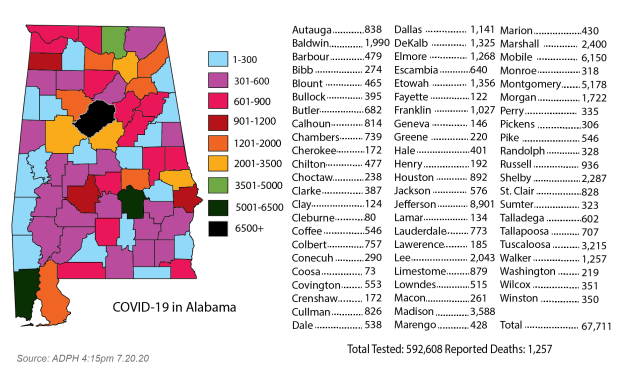 The Alabama Department of Public Health 10 a.m. update shows 67,711 COVID-19 cases in the state with 1,257 deaths. As of July 19, there were 1,465 related hospitalizations, the highest total since reporting began in March. More than 7,780 individuals have been hospitalized since tracking began.

According to bamatracker.com, an estimated 29,736 reported cases are considered recovered.

Pike County added nine new cases in Monday’s report, bringing its total to 546 with six confirmed deaths.  Pike County has a 14.4 percent positive rate among tests during the past 14 days.

Updated at 12:55 p.m. with additional reaction. MONTGOMERY, Ala. (AP) — Alabama will begin requiring face masks in public as... read more