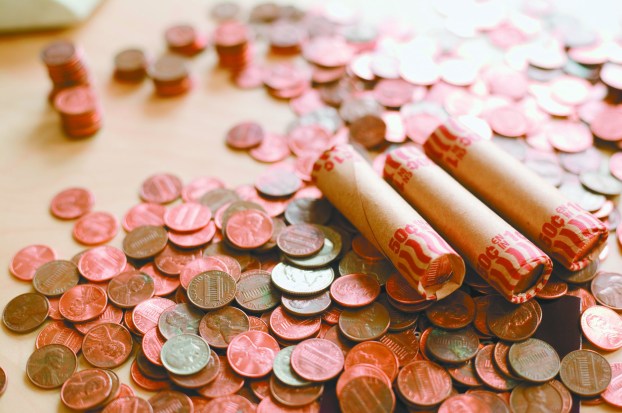 Retailers, banks respond to growing shortage of coins in circulation

Steve Garrett, the owner of Piggly Wiggly, has been hoping the national coin shortage wouldn’t have much affect on his business, but he said it already has.

“We’re trying to minimize the use of change any way we can because we can’t get much from the bank right now,” he said.

Garrett said he has enough change on hand to last a few weeks, but after that, he will need coins to be free flowing again.

“I’m not requiring customers to pay with exact change at the registers yet, but I am working on finding a way for customers to round up for donations,” Garrett explained.

The absence of enough coins in the nation’s marketplace has so alarmed the federal government that last month the Federal Reserve established a U.S. Coin Task Force to “mitigate the effects of low coin inventories caused by the COVID-19 pandemic.”

The 22 members of the task force were announced Friday, representing government agencies, banks and businesses, and they are convening this month with the goal of sharing recommendations in early August to identify “actionable steps that supply chain participants can take to address the current coin circulation issue.”

Locally, merchants and bankers sounded the alarm more than 10 days ago about the shortage. In response to the announcement about the national coin shortage, people in the community acted quickly to turn in coins to banks. Diana Lee, vice president and marketing officer at Troy Bank and Trust, said the bank has been receiving coins every day.

“People started responding the day after the post about the shortage went out,” Lee said. “We started having calls that afternoon, and people started bringing in coins the very next day.”

Troy Bank and Trust has been busy rolling thousands of coins, which Lee explained is a very good thing. “The customers who are coming in are happy to help and are excited to swap their coins in to either make a deposit to their account or exchange for paper money,” Lee said.

According to Lee, those who have turned in coins have helped dramatically. For a time, the bank was not able to order as many coins from the Fed as they normally would.

“We are very thankful for the community, but this is exactly the turn out we expected,” Lee said. “The communities where our banks are located are wonderful and very responsive. We are excited that they have taken this on themselves to help us.”

These turned in coins have helped to supply the different Troy Bank and Trust branches, and will help supply the new branch that will be opening in Dothan next month. These coins that the bank has received will also be put into circulation as normal.

One of the main reasons for the original coin shortage was due to the U.S. Mint closing and stopping production. This caused fewer coins to enter circulation, and additionally caused people to use alternate forms of payment. Now the U.S. Mint is back up and running and is producing coins once again.

“The Mint is able to send us a few larger quantities than they have in the past couple of weeks, but we are still not back up to the levels that we were before,” Lee explained.

It’s still unknown when the levels will be back to normal, but Lee believes this temporary shortage will not last long.