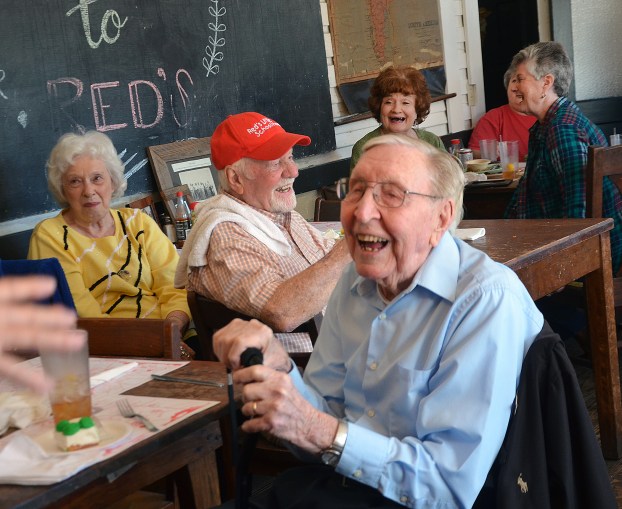 By JAine Treadwell | The Messenger The death of Obie Russell of the Oak Bowery community on July 13, 2020 brought sadness to all who knew him. Russell was 105. He lived his life by example. He is pictured at his 104th birthday party at Red’s Little Schoolhouse.

A good name is more desirable than great riches, Proverbs 22:1

Russell was affectionately known by all who knew and loved him as “Uncle Obie.

Perhaps, no one knew Uncle Obie better or loved him more than his niece, Kathy McKinney.

When McKinney’s mother died following surgery in 1959. Russell’s wife, Eddie Mae, had promised her sister to care for her three young daughters in the event she didn’t recover.

Russell immediately became a second father to his nieces.

“I was a tomboy so I hung around with Uncle Obie, on the tractor and baling hay,” McKinney said. “ Uncle Obie was a daddy to me in every way except he wasn’t my daddy.”

Obie and Eddie Russell didn’t have any children of their own but they raised everybody else’s, McKinney said.

“They had a country store in Briar Hill and they would give cookies and candy to all the children around. People back then didn’t have anything but they helped each other. Uncle Obie was always there with a helping hand for anyone in need. ”

Nora Stephens, also one of Russell’s “daughters,” was the oldest, 12, when their mother died.

“Uncle Obie and Aunt Eddie took care of us and loved us like we were their own,” Stephens said. “Uncle Obie was the epitome of a Christian man. He was kind, thoughtful, giving and loving all the years of his life. We were so blessed to have him all this time.”

Russell was born on January 5, 1915 in Naftel Station, Alabama. He loved his family and friends and he loved his country and wanted to serve in World War II. But he was turned down so he went to work as manager of a post exchange at Fort Benning, Georgia. He was honored to hear Gen. George Patton’s speech to the Third Army at the bowl in Columbus.

“Uncle Obie could have continued working with Civil Service but he wanted to come home to Oak Bowery and farm,” McKinney said. “He bought about 300 acres of land at $8 an acre. For the rest of his life, he farmed and lived his life by example. He put others before himself. He was loved and respected will be missed, terribly.”

Russell gave Cheryl Yawn her first flight manual and encouraged her to pursue a pilots’ license. At the age of 24, she started her flying career.”

“Over the years, Uncle Obie heard about my flight experiences from me and my parents and told me that he would like to fly sometime. We finally made that flight happen when he was 100 years old. He was so happy that he just glowed when I let him take the controls of the airplane and he flew over his familiar territory. That flight with him warmed my heart! I loved Uncle” Obie. I will always smile and be thankful that I had the privilege of knowing him.

Sonny Mills said there has been no better person than Obie Russell.

“Obie was a good man,” he said. “I have known him many years and he has always been willing to help his neighbors in any way. I don’t know of a better man than Obie Russell.”

William Fannin said Russell was the kind of friend and neighbor that could be counted on in all kinds of weather.

“He cared about the community,” Fannin said. “Obie was a big reason the people in the Shady Grove area got water. It would be hard to say what he meant to all those who knew him throughout his life.”

Red Deese said everybody who  knew Russell, respected him. “He would help anybody at any time. It didn’t matter to him. It won’t be the same without him.”

Visitation for Obie Russell will be from 5 until 7 o’clock tonight at Dillard’s Funeral Home in Troy. The funeral service will be at 10 a.m. Saturday at Belser Cemetery between Briar Hill and Oak Bowery. Those attending are asked to bring a lawn chair, umbrella and mask and maintain social distance.

A pair of Trojans made news on Wednesday morning as linebacker Carlton Martial was named Preseason All-American and running B.J.... read more