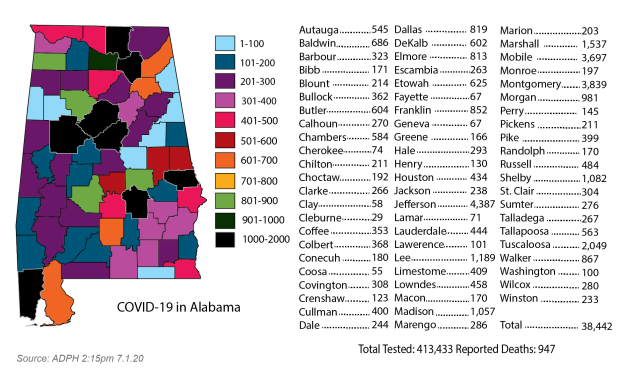 With 467 cases, including 15 reported in the last two days, Pike County moved from a high risk based on the increasing rate of new cases. A total of 39 counties were flagged as “very high risk”; with 9 as high risk, 12 as moderate risk; and 7 as low risk.

Under the ADPH guidelines for “high risk” counties are wearing faces coverings; avoiding groups of more than 20 people; avoiding all unnecessary travel; maintaining at least six feet of distance; and eating at home rather than dining out.

Statewide, more than 49,890 cases have been confirmed with 1,077 deaths. New data for hospitalizations also shows more than 6,745 people have been hospitalized since tracking began and more than 25,783 are presumed recovered.

As the state heads toward the Republican primary runoff on Tuesday, Alabama’s elections chief said Friday that he is telling local officials that they cannot require voters to wear masks at polling places..

Several cities and counties have local mandates to wear masks in public places after Alabama saw a rapid rise in COVID-19 cases and the total number of people hospitalized with COVID-19.

“While it can be ‘strongly recommended’ that an individual wear a mask, it cannot be required,” Alabama Secretary of State John Merrill said he told county election officials.

“In our state, we will continue to see that the right for every eligible Alabamian to vote is protected,” Merrill said.

Merrill said a June 30 notice from Alabama Attorney General Steve Marshall said it is clear that “state law does not allow for an individual’s qualification to vote to be contingent upon the wearing of a mask or face covering, respecting social distancing, using gloves, or having a temperature in a normal range.”

Alabama successfully appealed to the U.S. Supreme Court to overturn a judge’s preliminary injunction that would have loosened absentee ballot requirements for some voters during the pandemic and allowed curbside voting.

Alabama voters on Tuesday will decide the Republican primary runoff between Jeff Sessions and Tommy Tuberville. The race will decide who will face Democratic Sen. Doug Jones in November.

Alabama added 2,164 new cases of COVID-19 on Thursday, setting a record one-day high for reporting in the state. The... read more