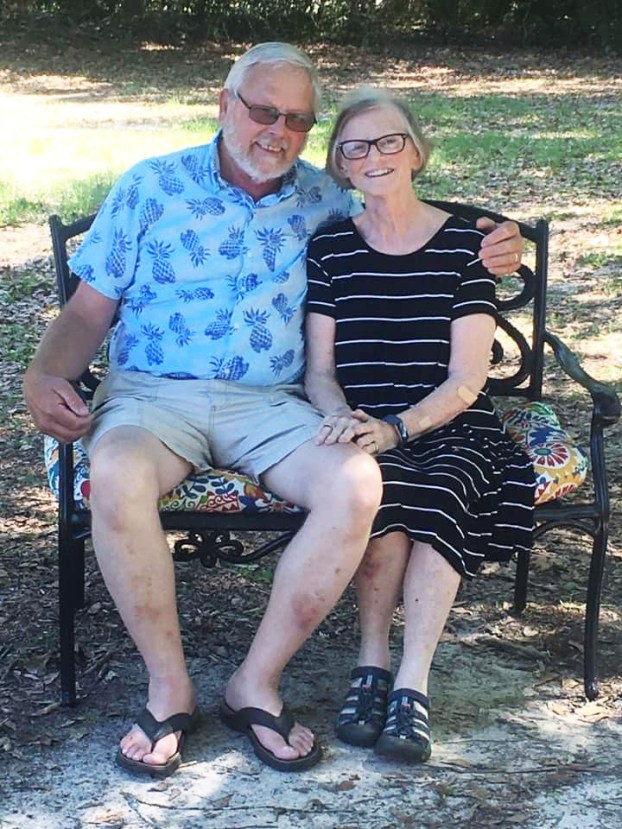 Tammy Powell, seen here with her husband, Eddie, was known throughout Pike County for her work with the Pike County Extension Service, 4-H, the Cattlewomen’s Association. She passed away Friday after a years-long battle with cancer, and friends said her legacy lies in the way she lived her life in the face of challenges. ‘She carried on with her life with such a happy spirit,” said Mary Helms Adams.

To live in the hearts we leave behind is not to die.

The hearts of so many throughout Pike County were saddened at the news of the death of Tammy Powell on Friday, July 10, 2020. But, she will continue to live in the hearts of the generations of people whose lives she has touched.

“Tammy left a high mark that few of us will ever reach,” said Mary Helms Adams, a longtime friend. “She showed us how to live by the way she lived her life. Tammy inspired us with her courage through the struggles of her illness as she carried on with her life with such a happy spirit. She was an inspiration to all who knew her.

“Through her openness, Tammy let others share in her bad times. The way she accepted her illness was an inspiration, a ministry. Tammy left a legacy of love and caring that will benefit all of us who knew and loved her.”

Powell touched hundreds of young lives as the Pike County Extension coordinator and the 4-H leader in the schools of Pike County, even after her retirement.

Deborah Huggins Davis said so many young people have achieved success because Powell had the ability and the desire to light their candles and lead them on the right paths.

“Tammy knew how to reach young people and she motivated them in such a way that they could find success and happiness in life,” Huggins Davis said. “She led by example and with such a happy spirit. Her legacy will live on through the young people whose lives she touched and the examples they set for others.”

Powell was a member of several volunteer organizations in Pike County and a leader in all of them.

She was a member of the Pike County Cattlewomen’s Association and served as its president. She was also active with the youth programs offered through the Cattlemen’s and Cattlewomen’s associations.

“Tammy just never gave up. She fought cancer with everything she had and never stopped being involved,” Garrett said. “She was in a wheelchair that day but she was smiling and happy. She was an inspiration and she was one of a kind. We should all strive to be more like her.”

Throughout her illness, Powell continue to be involved with the organizations around the county. She was a longtime member and leader of the Pike County Chamber of Commerce’s award-winning Farm-City Committee. Her involvement played a huge role the committee’s being named the Alabama’s Best Farm-City Committee in the state several times.

“Our hearts are saddened by the loss of such a great woman,” said Dana Sanders, Chamber president. “Mrs. Tammy was completely devoted to the committee’s program of work. You could always count on her to volunteer with a smiling and happy heart. She will be missed by so many and in so many ways.”

Kim May, Pike County Salvation Army director, said, too, that Powell was a leader and a do-er.
“Tammy was a longtime and loyal member of our board,” May said. “She was willing to do whatever was asked of her and more. Tammy  always supported our fundraisers, always. She dipped camp stew and rang the bells many times and was happy to do it. She was a true community servant and she will be greatly missed.”

Don Renfroe is a longtime friend of Tammy Powell. He remembers when she came to Brundidge, bringing Heather “in a peach basket.”
“Tammy and I have been in the Cattle organizations together, worked calf shows together, gone to church together and we have been friends through it all,” Renfroe said. “What can I say about Tammy? There are so many good thing to say.”

Renfroe said Powell was as talented as she was energetic.

“Whether Tammy was at a calf show or at church, she was a leader,” Renfroe said. “We were in Sunday school class together and she was always prepared. Now, she had her opinions about things and she was usually right.

“Tammy was a very godly lady. She was always willing to share her faith. She could give a program at the drop of a hat.

“Her faith was unchallenged by anybody or anything. She loved the Lord and He had given her the talent to sing and she often sang solos at Sunday church and at special programs. Tammy will be missed in many places and in many ways. At our church, Brundidge United Methodist, especially.”

Renfroe said Powell used her illness to educate others about cancer and she provided inspiration to others going through similar situations to not give up, to continue the fight.

“The way she handled her illness was an example to all of us,” he said. “And, through it all, she glorified God.”

Troy City Schools registration for the 2020-2021 opened this week with both traditional and virtual options available to students. “School... read more