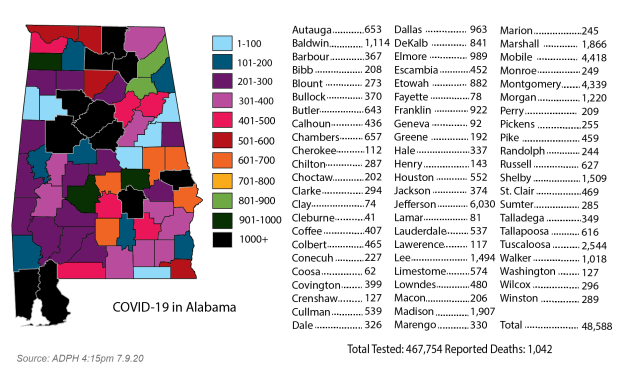 Alabama added 2,164 new cases of COVID-19 on Thursday, setting a record one-day high for reporting in the state.

Locally, Troy University has self-reported 10 new cases since July 1, including five students living off campus in Troy, four employees in Troy and one in Phenix City.

The coronavirus outbreak in Alabama is headed in a “bad direction,” the head of the Alabama Hospital Association said Wednesday, as the state reached a new high for people hospitalized with COVID-19 and a new low for available intensive care beds.

On Thursday, 1,110 people were hospitalized because of the coronavirus across the state, according to the Alabama Department of Public Health. That is the highest number since the pandemic began. Doctors have expressed concern about the sharp rise in hospitalizations. The state had 683 hospitalized patients two weeks ago, on June 24.

Since the pandemic began, more than 46,000 people in Alabama have tested positive for COVID-19 with about 30% of infections being reported in the past two weeks.

Hospitals are managing for now , but he said he was worried about what the next few weeks will bring as newly infected people begin getting sick.

“We are worried really about the trends that we are seeing,” Dr. Jodie Dionne-Odom, an assistant professor of infectious diseases at the University of Alabama at Birmingham, said in a call with reporters. “It’s not really about any one data point or any one number. But the fact that we are seeing these sharp increases in hospitalizations and cases over the past week to two is really concerning.”

She said when confirmed cases rise, the number of hospitalizations typically rise about two weeks later.

The Town of Goshen has received a FEMA (Federal Emergency Management Agency) grant in the amount of $260,000 for the... read more