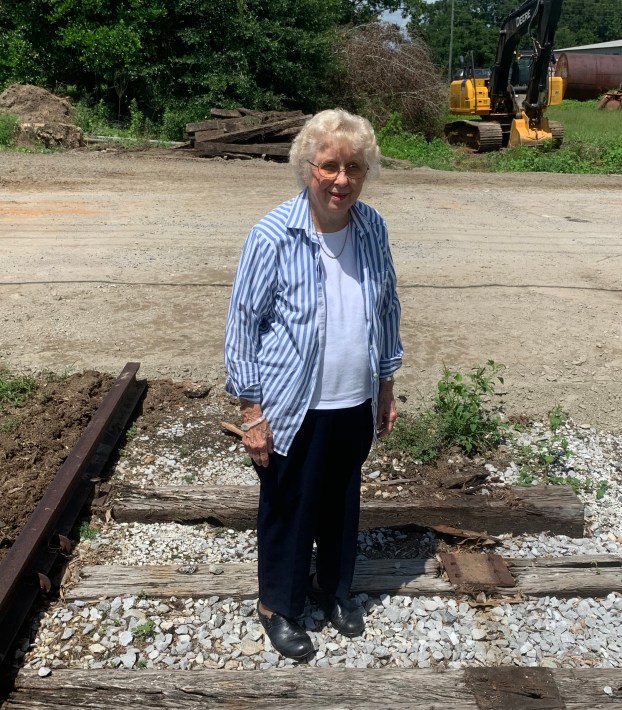 Mary Louise Sanders stands in a section of the historic railroad track that runs through the town of Goshen.

The snapping of iron jaws created a lot of interest in Goshen Wednesday morning as a section of Central of Georgia Railroad tracks was been removed.

But, the activity on Howard Street jarred memories of the railroad that was lifeblood of Goshen for several generations.

Since 1890, railroad tracks, if not the railroad, have been at the heart of Goshen.

Al Sanders stopped to watch as the iron rails at the crossing were being prodded, lifted and set aside.

“Right down there, was the depot and a warehouse,” Sanders said pointing in that direction. “I was a boy back then and several of us were in a dugout place under the depot smoking.”

Night was falling and a railroad worker came and set out a flare to alert an oncoming train to the stop.

Thinking that fire wouldn’t burn, Sanders said he and the others thought it would be a good idea to throw around the flare. “It was not,” he said, laughing.

Sanders’ dad worked in Troy and he remembered the time he accompanied his dad to the big city.  His opportunity to go Troy was actually a trip to the dentist.

Another passenger on the train was Lee McCormick, who was holding a pipe in his mouth.

“The conductor told him he couldn’t smoke on the train but Mr.  McCormick said he wasn’t smoking,” Sanders said. “But the conductor acted like he didn’t believe him. So, Mr. McCormick said, ‘I’ve got a pipe in my mouth and I’m not smoking and I’ve got shoes on my feet and I’m not walking.”

Sanders said the conductor went on his way.

Carter Sanders grew up near the railroad tracks and remembers the first time a hobo came to their house asking for food.

“He scared all of us to death,” Sanders said, laughing. “What I remember most about the train was waking up one morning to see a train so long that it reached from one side of town to the other. We learned later the train was carrying the retiring president of Southern  Railroad. He was riding every mile of the railroad line on that special train.”

Carter Sanders said he has heard many stories surrounding the railroad.

“Houses were all up and down the tracks, which marked the shortest distance to Troy,” Sanders said. “The people would walk the track 12 miles to Troy and then back home. Those tracks made it possible for people in rural areas to stay connected with the outside world.”

The railroad line ran through Goshen,  Andalusia and on to Savannah, Georgia. Not only did the train carry cotton from the local warehouses, it also brought scores of travelers to Goshen.

When the train stopped in Goshen, it was welcomed by a coronet band composed of local musicians and throngs of smiling and waving residents. And, when it pulled away,  Goshen residents were sometimes on board going to new and distant places, if only the dentist office in Troy.

As the nation topped 3 million cases of COVID-19 on Wednesday, officials in Alabama and the nation continued to press... read more