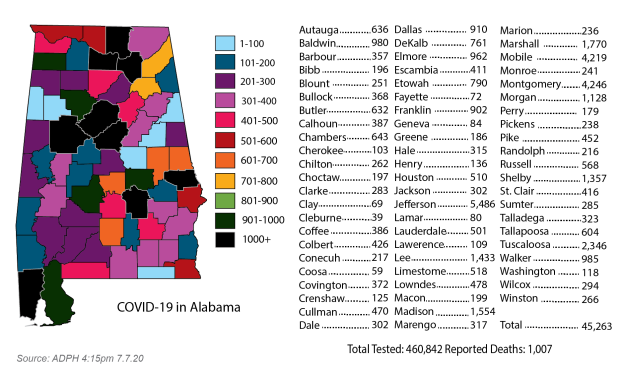 MONTGOMERY, Ala. (AP) — States like Alabama with soaring coronavirus infection rates have a window of opportunity to bring it under control, the country’s top infectious diseases expert said Tuesday as he spoke in favor of state and local requirements to wear face coverings in public.

Dr. Anthony Fauci, director of the National Institute of Allergy and Diseases, said the United States is in the midst of a resurgence of new coronavirus cases, sometimes seeing daily cases almost double over the country’s previous baseline high. He said that differs from other countries that saw a decline after a baseline high.

“We are facing a serious problem now,” Fauci said in a news conference with Alabama Sen. Doug Jones.

Infection rates have been rising particularly in the South and West.

“What is alarming is the slope of the curve,” Fauci said about the rise in cases in Alabama.

He added that the state isn’t yet at the point of exponential growth. “You have an opportunity, a window to get your arms around this and to prevent it from getting worse.”

Fauci said he supports state and local mandates to wear face coverings in public. He said they are beneficial to avoid sending mixed signals on the helpfulness of masks.

“The signal should be wear a mask, period,” Fauci said.

Gov. Kay Ivey has declined to issue a statewide mask order, saying it would be difficult or impossible to enforce. A number of local areas, including Jefferson County, Madison County, Mobile and Montgomery have local requirements.

Fauci also cautioned against taking comfort in lower death rates, which may be a result of better therapies and younger, healthier people becoming infected.

“It’s a false narrative to take comfort in a lower rate of death,” Fauci said. “There’s so many other things that are very dangerous and bad about this virus. Don’t get yourself into false complacency.”

Since the pandemic began, more than 45,260 people in Alabama have tested positive for COVID-19 and 1,007 have died as of Tuesday. Nearly 30% of the state’s cases have been reported in the past two weeks. In Pike County, 452 cases have been confirmed, an increase of 15 since Monday. The county has reported five confirmed deaths.

“Let that sink in a little bit. Thirty percent of those 45,000-plus cases have come in the last two weeks, come since Memorial Day after we loosened restrictions, after people started ignoring the signs about wearing a mask and social distancing,” Jones said.

Fauci said the mean age of people getting infected now is about 15 years younger than what the United States previously saw. He that cautioned young people, though generally healthier, can still face serious illness, particularly if they have underlying health conditions such as diabetes or obesity.

“We are now getting multiple examples of young people who are getting sick, getting hospitalized, and some of them are requiring intensive care.” Fauci said.