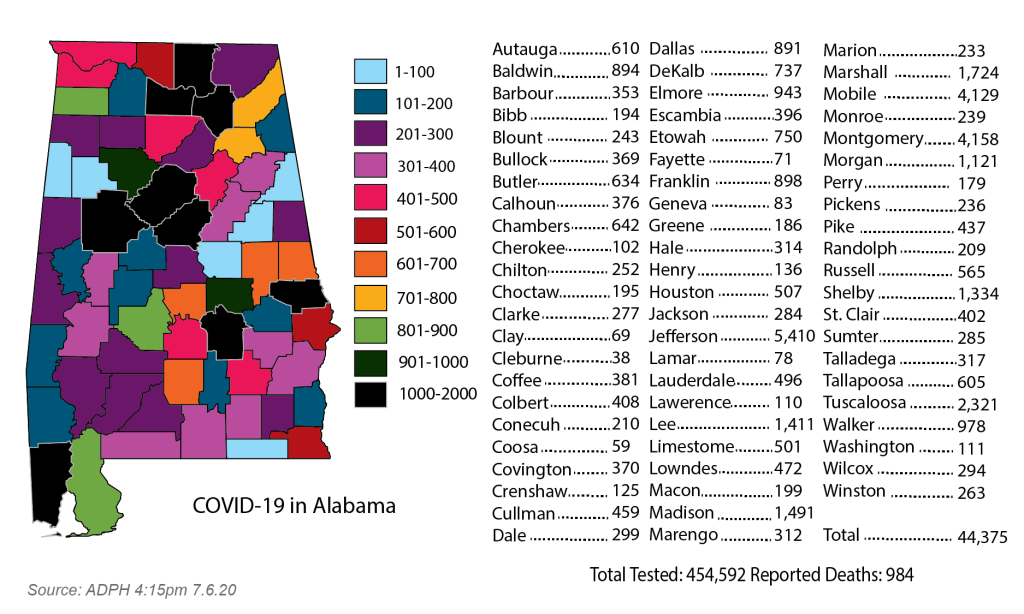 Alabama’s hospitalizations due to COVID-19 spiked on Monday, reaching the highest levels since tracking began.

As of 10 a.m. Monday, the Alabama Department of Public Health reported 919 hospitalizations, an increase of more than 100 from the previous day. Statewide, more than 44,375 cases of coronavirus were reported with 984 confirmed deaths. More than 13,725 cases have been confirmed in the past 14 days, and Monday was the first day the state reported zero additional deaths.

In Pike County, total cases reported 437 with five confirmed deaths. The county has confirmed 72 cases in the last 14 days and remains in the “moderate” risk designation by the ADPH. The county has reported declining new cases in the 14-day average and seen a decline in visits for COVID-like symptoms, but the percent of positive tests has not declined, according to the ADPH.

The dollars come from an education relief fund created by Congress that allows governors to determine the spending plans. Alabama’s Republican governor is sending her state’s allocation to the state education department.

“Closing school during the pandemic disproportionately impacts students who are already struggling, and it is our obligation to provide as much stability and access possible in these uncertain times,” Ivey said in a statement.

A separate $50 million in federal aid, Ivey announced, will be spent to reimburse Alabama colleges and universities for coronavirus-related expenses.

A garden and an online journal help Lieb focus…