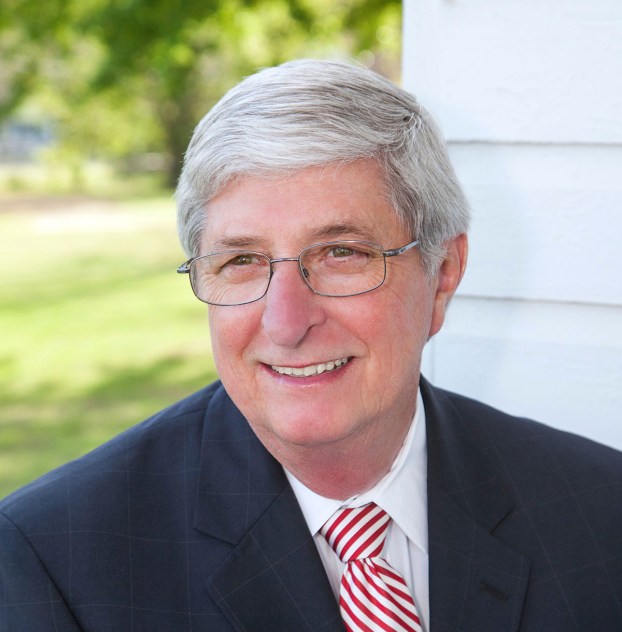 Friends, coworkers reflect on Thomas’ impact in City of Brundidge

“The greatness of a man is not how much wealth he acquires but is his integrity and his ability to affect those around him positively.”

Bob Marley could have been thinking about Britt Thomas when he penned those words.

Thomas, scheduled to retire as the Brundidge city manager in November, has been battling serious health issues in recent weeks.

During the 38 years the city has been under his watch, Thomas has served with integrity and with an uncanny ability to positively affect those around him.

Several members of the staff at Brundidge City Hall have worked with Thomas most of their careers. To a one, they speak of Thomas’ integrity and the positive affect he has had and continues to have on their lives.

Linda Faust, assistant city manager, has worked with Thomas and learned from him for 17 years.

“Britt has taught me a lot about integrity through the way he always handles himself, Faust said. “I was green when I came to government work and Britt as taught me everything I know about city government and much about life.”

Faust said Thomas has made tremendous contributions to the City of Brundidge for nearly four decades.

“Britt has made a small town a good city and he has done it with integrity, honesty and dedication,” Faust said. “As a community, we should forever be grateful to Britt for his dedication and commitment to making Brundidge what it is today.”

Faust said Thomas will leave the city with a lasting legacy that will benefit generations yet to come.

“And, personally, Britt has taught me about life and is an example of how it should be lived,” Faust said. “First, Britt is a family man. His family always comes first. He taught me about friendship and Britt will forever be one of my trusted friends. I can’t thank him enough for his friendship. I will cherish it forever.”

Brundidge Mayor Isabel Boyd has worked with Thomas as a member of the Brundidge City  Council and now as mayor. She said Thomas is soft spoken but can be stern at times and always at the appropriate times.

“We haven’t always seen eye-to-eye but we have always been respectful of each other,” Boyd said.

“Britt is a man of integrity and I appreciate and respect him. He has made a positive difference in Brundidge and has been an outstanding leader of our employees over the years. He always treats them with respect  and they appreciate that. Britt is one of the most intelligent people I know.

“The City of Brundidge will continue to benefit from his knowledge and the foundation he has laid for many years to come.”

Thomas worked for the city for several years before going to work for the Pike County Commission. “When we had the opportunity to bring him back, that was the best move the city has ever made,” the mayor said. “Britt has been an outstanding city manager and he has the admiration and respect of all city employees.

“He truly cares about our employees. He loves his family and is an outstanding  family man. What better can you say about a man than that?”

When Thomas came on the Brundidge scene in 1977, Brundidge Police Chief Moses Davenport said he thought he was a young boy.

“When they told me Britt was the new city clerk, I didn’t know about that,” Davenport said. “But, I saw right off he walked like he had something on his mind. He was observant; he was sharp and he cared about the city and about the people from the very start.”

Davenport said Thomas took an interest in the city’s Police Department, the volunteer fire department and the rescue squad.

“Britt was an asset from the day he walked in City Hall. He was probably the most powerful man in Brundidge and the most important.”

Davenport said Thomas gave him sound advice and it was readily taken.

“Britt is an intelligent man and he looked after city affairs,” he said.” He was professional in every way and was an outstanding leader because he had your respect and you could trust what he said. Britt could talk all day and not tell a lie. When he retires, Willie Wright is going to have some mighty big shoes to fill — 13 triple X!”

Wright, assistant city manager for the city, agreed that he will have mighty big shoes to fill and in many different ways. “Britt Thomas was and is essential to the City of Brundidge,” Wright said. “I had many opportunities to work with him and learn from him as principal of Pike County High School over 16 years. He was always fair in his dealings and it was important to him to do right by everyone.”

Wright said what impressed him most about Thomas was his concern for others.

“He believed  to be successful in whatever you were doing, you had to do right by people,” he said. “And always doing right is what made him such an outstanding city manager and such a trusted friend.”

“He has a wealth of knowledge that he readily shares,” Wright said. “I know that I will have a huge challenge before me when Britt retires. I know that I will never be able to fully step into his shoes. That will be impossible. What he accomplished in 38 years is incredible. I appreciate his guidance and my hope is that one day I will have accomplished just half what he did.

“Brundidge is a better place and the citizens are better off because Britt Thomas came back ‘home’ to Brundidge.”

“John Lewis: Good Trouble,” a documentary about Lewis, a Pike County native, who was a leader in the Civil Rights... read more