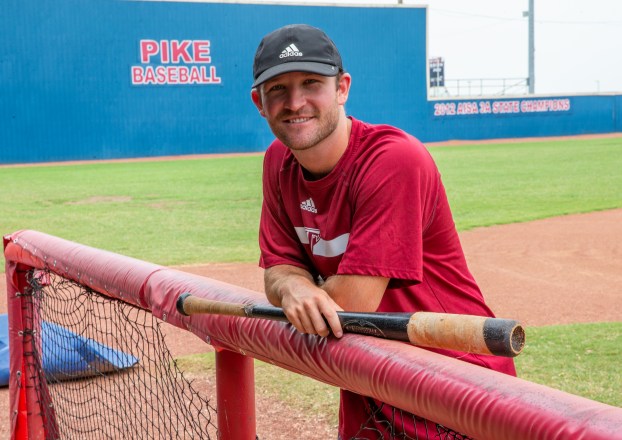 By Dan Smith | The Messenger Former Pike Patriot and Troy Trojan Rush Hixon always wanted to be a baseball coach. Earlier this month he became the newest head baeball coach of the Patriots.

When you mention the name Hixon in Troy and Pike County, you immediately think of two things — farming and baseball.

Recently named the new head baseball coach at Pike Liberal Arts, Rush Hixon grew up in one of the most respected farming families in the state, and equally respected for their success in athletics.

Rush always knew he wanted to be a baseball coach, and he remembers the advice of his grandfather, the late William “Bill” Hixon, who was a two-sport athlete at Troy State College.

“My granddad was an incredible person and an incredible farmer,” said Rush. “All he knew was work. In his eyes, him showing up to the farm was never work. He used to tell me, in the last year before he passed, was that some people dread Monday. He said he never dreaded Monday, because that was a day he got up and to do something that he loved. That’s how I view coaching baseball at Pike Lib. I don’t come to work. I come to do something I love at a place I love with people I love. That quote ran through my head when I accepted this job, as I wanted to have that same attitude and mindset for a career.”

A graduate of PLAS and Troy University, Coach Hixon, age 23, credits all of his family for supporting and preparing him for his dream job of coaching baseball, even though there is a rich tradition of farming in the blood. Has father Billy, mother Laura, brother Ross and sister Hanna have each had a role in Rush’s development.

“I think I would be the fifth generation of Hixon farmers, if I were to take it over, but obviously I have taken a different career path. They work extremely hard and it was something that was in their blood. My dad (Billy Hixon) is the same way. He knew he was going to be a farmer since he was 12 years old, arguably earlier.  My dad was my coach growing up. We’ve had some disputes before, and he has told me he wants to help me coach at Pike Lib. I told him we will have to wait on that. My parents are an extremely big influence in my life.”

“Ross was arguably one of the biggest influences in my career as a player. He probably does not know that, and I would not tell him that to his face, but he helped me out a lot from bullying me to toughen me up to teaching me things. I am fortunate to coach with him during the summer and now he is going to help me coach up here at Pike. Now if you ever come to a game and we are fighting in the dugout, know that we are brothers, and that will happen.”

Mrs. Laura Hixon, Rush’s mom, has always been the center of his universe on and off the ballfield.

“I cannot put into words what she has done for me,” said Rush. “On top of being a baseball mom, she is just simply mom when I needed her to be and still is to this day. I can’t thank her enough and I am probably a mama’s boy. She is probably my favorite person walking this earth.”

Upon graduation from high school in 2015, Hixon played one year of college ball at LBW in Andalusia, another year at Central Alabama Community College and two years for Coach Mark Smartt at Troy University as a pitcher, with Chase as the catcher.

“He is a year older than me, but we were in the same class at Troy,” Coach Hixon said. “We also played against each other in rec league. When Chase walked up you never wanted to see him up to the plate. We talk now a lot and are friends. I told him, this is a very unique deal and something that has probably never been done. There is no reason both of us cannot be extremely successful in a town like Troy with how much baseball talent is here.

“When you think Troy you think baseball, from college to high school to rec league, there is so much talent that has come through here and every school in the area. It is awesome to be a baseball person from a baseball town.”

Several coaches have had a key role in the development of Rush Hixon, including Butch Austin through his junior year, Allen Ponder for his senior year, and a talented staff at Troy that included not only head coach Mark Smartt but assistant coaches Matt Hancock and Coach Shane Gierke. It was, however, director of baseball operations, John Rushing, that just may have set Rush on the path to coaching.

“Coach Rushing gave me my coaching start when I was 17,” said Coach Hixon. “I was injured and could not play for him, so I helped coach the Troy Post 70’s 15U team. I have now coached Post 70 for six years, and the rest is history. He told me then as a 17-year-old that I was going to be a good coach one day. He told me to stick to it and I would. If I did not have that start that early, I do not know if I would be where I am now. I owe him a ton of credit and he is one of the best baseball minds I have been around.”

As an assistant for Coach Ponder and the Patriots last season, Hixon saw the season come to an abrupt halt due to the Covid pandemic, a season that had the Patriots as a strong favorite to win another AISA state championship.

Many of those ballplayers are returning, giving Coach Hixon a roster deep in talent.

“I was fortunate to inherit a very talented roster, but in baseball there will always be challenges,” said Coach Hixon.

“You may be the best team on paper, but you have to do things correctly in order to win. Having talent is helpful, but we have to also put our own spin on things and work like we are the worst team in the state. If we have that work ethic along with the talent, it will be a good mixture.

“Keeping these guys grounded and humble will be a task early on. There are guys on this team that have not won a state championship yet, and there are guys that had their season taken away. I think we will be hungrier than ever, and I know me as a first-year head coach in high school will be hungrier than ever. I’m excited about getting these guys out here on the field together and tee it up with whoever.”

Having played at Pike, Coach Hixon is thankful to now be able to coach the game he loves, for the school he loves.

“It is funny, but this was one of my dreams, to come back and coach at Pike,” said Coach Hixon.

“I wanted to stay in the college game but when the opportunity came up, I could not turn it down. It seemed like this was perfect timing and God was sending me to where he wanted me to be. For me it was an easy decision.”