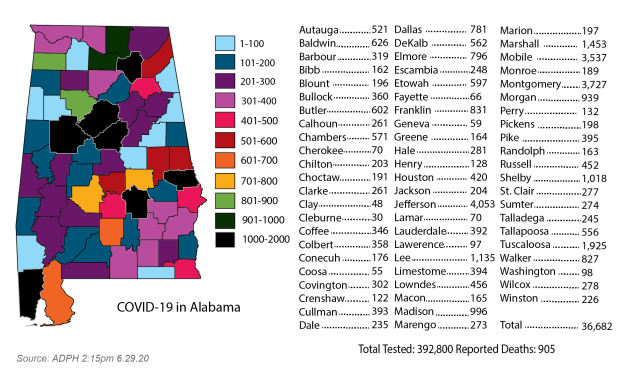 Alabama’s COVID-19 cases spiked on Monday after a weekend reporting lag with the Alabama Department of Public Health.

The ADPH said on Sunday The automatic feeds from laboratories that make up the majority of the SARS-CoV-2 lab reports received did not process. Monday’s update included the lab results from June 27 and 28. This also affects the total Confirmed Cases and Total Tested numbers that appear on the dashboard today and tomorrow.

As the state’s infection rate continues to climb, the Associated Press reports more cities are implementing, or considering, a requirement to wear face masks in public places to curb the spread of the new coronavirus.

Montgomery and Birmingham and Jefferson County have orders in place requiring face masks in public places. The mayor of Selma on Friday issued a similar order. Tuscaloosa will vote on a possible mask ordinance Tuesday. The mayors of Decatur and Mobile indicated their city councils will discuss the idea.

Mobile Mayor Sandy Stimpson wrote on social media that he is asking the Mobile City Council to approve an order requiring face coverings in public places.

“This step was necessitated by the rising number of COVID infections over the past week. There is no question that masks can prevent the spread of COVID-19. The virus is actively spreading in our community and remains a serious threat to public health,” Stimpson wrote on Twitter.

Decatur Mayor Tab Bowling wrote in a social media post that the City Council will discuss facial covering at a special meeting Monday evening. Selma Mayor Darrio Melton issued an executive order this week requiring all citizens to wear a face covering in public places within the city of Selma to slow the spread of COVID-19, The Selma Times Journal reported.

As of Sunday, the state had reported more than 34,600 cases of COVID-19, the disease caused by the new coronavirus, and at least 898 deaths from the virus. More than a fourth of the cases came in the last two weeks. The state this week hit the highest number of cases reported in a single day with more than 1,100 cases.

State health officials have expressed concern over the numbers.

Alabama Gov. Kay Ivey will decide in the coming days whether to extend Alabama’s “safer at home” order that expires Friday.

The order limits occupancy in stores, bars and restaurants, requires restaurant employees to wear masks and encourages members of the public to wear masks.

Alabama health officials have announced they plan to put color-coded rankings to track the spread of COVID-19 in counties.

The map, which will list counties as red, yellow or green is not yet available on the state dashboard, but is expected to be unveiled in coming days, State Health Officer Scott Harris said last week.

Harris said that the display is meant to give people and local officials information in a form that is “easy to see.”

“She was a gatherer.” That’s how friend Edith Synco described Dr. Jean Laliberte, the retired vice chancellor for development at... read more