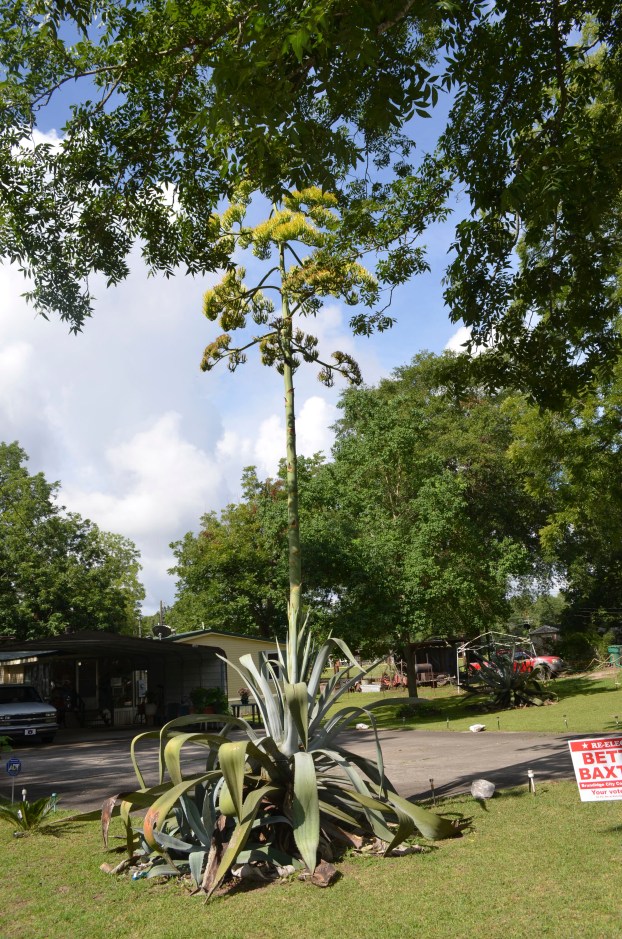 Traffic along 6th Avenue in Brundidge is a little heavier these days and also much slower, actually vehicles are creeping along. All eyes are looking upward in anticipation of the flowering of Betty Baxter’s century plant.

“It’s been a long time coming,” Baxter said and added with a smile, “but not a hundred years.”

And, at long last, the bright yellow blooms have appeared and there could be more to come.

“Since this is the first time that the century plant has bloomed, I’m not sure if the blooms will be bigger and brighter or if it’s already in full bloom,”  Baxter said. “But it’s been interesting watching it grow and bloom and I guess now I’ll watch it die.”

The century plant is a huge plant, towering about 12 feet into the limbs of a neighboring pecan tree, with a rosette of leathery leaves that are almost as long as Baxter is tall.

The leaves have scores of menacing needles along their spines that keep predators at bay, Baxter said. “You don’t have to worry about anybody bothering your century plant.”

The century plant is native to Mexico and also to New Mexico, Arizona and Texas.

But the century plant doesn’t live 100 years, it just seems like it does, Baxter said with a smile.

Most century plants live between 10 and 30 years and, when they bloom, they die.

“If that’s right, then this plant will die because it is finally blooming,” Baxter said.

“I got this plant and two more from my son, Pete. The other two plants didn’t grow like this one. We decided the one with the stalk and blooms grew like it did because it gets a lot of water and the dirt around it is real rich.”

For three years and more, Baxter watched her century plant grow and grow and then shoot up a stalk that “Jack” could climb. She was excited when buds first appeared atop the stalk, but then it seemed like the buds would never bloom.

But, when the blooms finally appeared, they were, at first,  a rather dull yellow and then they turned brighter and brighter and now sunshine bright.

Just how long the blooms will remain, Baxter’s not sure.

“What happened to Pete’s plant was, when the blooms were gone, the plant turned brown and fell over and died,” Baxter said. “I guess that’s what will happen to mine. There were a lot of berries on Pete’s plant and people came and got the berries to eat and to boil for medicine.”

Baxter said her son, Fred, who lives in New Jersey,  said the berries from century plants are put in zip-lock bags and sold for eating and for making medicine.

“Some people cut the stems and use the sap as a hair and scalp conditioners,” Baxter said. It is also used to treat skin conditions.

Baxter, laughingly, said, although the century plant appears to have many uses, she has no plans to harvest and boil the berries for any purpose.

She is satisfied to have had a front row seat to the life cycle of the century plant.

Alabama’s COVID-19 cases spiked on Monday after a weekend reporting lag with the Alabama Department of Public Health. As of... read more