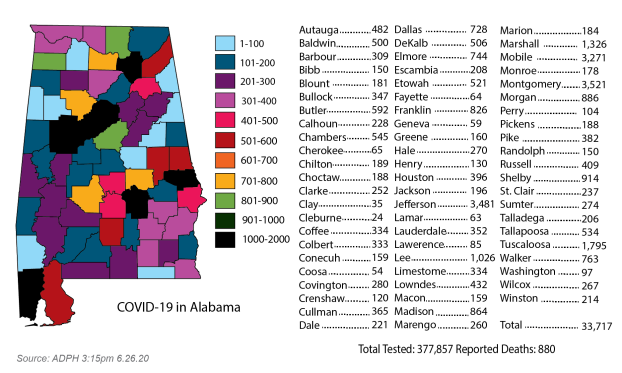 According to the Alabama Department of Public Health 10:15 a.m. update, Pike County has reported 382 total confirmed cases with five deaths since tracking began.

Statewide totals climbed to 33,717 cases with 887 confirmed deaths, with more than 9,950 of those cases reported in the last 14 days. The ADPH estimated 18,866 presumed recoveries.

Friday’s increase comes one day after the state set a new daily record of more than 1,100 cases on Thursday and is the third highest daily case increase since the start of the pandemic.

Dr. Jeanne M. Marrazzo, an infectious disease specialist at the University of Alabama at Birmingham, said that there are some alarming indicators about the state of the outbreak, including a rise in the percentage of tests that are coming back positive in Alabama.

“People have been increasingly alarmed that over the last 10 days, two weeks we have continued to see marked increases in the number of cases reported,” Marrazzo said.

“I’m really, really worried about the Fourth of July. I think that will likely determine the trend for Alabama for the rest of the summer,” Williamson said.

Texas and Florida reversed course and clamped down on bars again Friday in the nation’s biggest retreat yet as the number of confirmed coronavirus infections per day in the U.S. surged to an all-time high of 40,000.

Texas Gov. Greg Abbott ordered all bars closed, while Florida banned alcohol at such establishments. The two states joined the small but growing list of those that are either backtracking or putting any further reopenings of their economies on hold because of a comeback by the virus, mostly in the South and West.

Health experts have said a disturbingly large number of cases are being seen among young people who are going out again, often without wearing masks or observing other social-distancing rules.

“It is clear that the rise in cases is largely driven by certain types of activities, including Texans congregating in bars,” Abbott said.

Abbott had pursued up to now one of the most aggressive reopening schedules of any governor. The Republican not only resisted calls to order the wearing of masks but also refused until last week to let local governments take such measures.

“The doctors told us at the time, and told anyone who would listen, this will be a disaster. And it has been,” said Dallas County Judge Clay Jenkins, a Democrat who is the county’s top official. “Once again, the governor is slow to act. He is now being forced to do the things that we’ve been demanding that he do for the last month and a half.”

Stocks fell sharply on Wall Street again over the surging case numbers. The Dow Jones Industrial Average shed 730 points, or nearly 3%. Texas reported more than 17,000 new cases in the past three days, with a record high of nearly 6,000 on Thursday. In Florida, under GOP Gov. Ron DeSantis, the agency that regulates bars acted after the daily number of new cases neared 9,000, almost doubling the record set just two days earlier.

Healing through her art

Kitty Smothers might seem like a more artsy name but, even behind the name, there’s no mistaking the talent of... read more