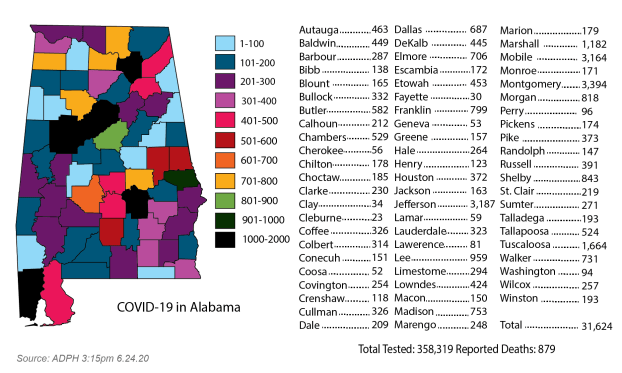 The state added 954 cases on Wednesday and 25 new deaths, bringing totals to 31,624 cases and 879 deaths. According to the Alabama Department of Public Health, an estimated 15,974 of those cases have recovered.

According to Troy University, four more off-campus resident students have self-reported contracting the virus this week.  These students would not be included in the Pike County totals unless they are permanent residents of Pike County.

Hospital administrators and health experts warned desperately Wednesday that parts of the U.S. are on the verge of becoming overwhelmed by a resurgence of the coronavirus, lamenting that politicians and a tired-of-being-cooped-up public are letting a disaster unfold.

The U.S. recorded a one-day total of 34,700 new COVID-19 cases, the highest in two months, according to the count kept by Johns Hopkins University. The number of new cases per day is now running just short of the nation’s late-April peak of 36,400.

While newly confirmed infections have been declining steadily in early hot spots such as New York and New Jersey, several other states set single-day records this week, including Arizona, California, Mississippi, Nevada, Texas and Oklahoma. Some of them also broke hospitalization records, as did North Carolina and South Carolina.

“People got complacent,” said Dr. Marc Boom, CEO of the Houston Methodist hospital system. “And it’s coming back and biting us, quite frankly.”

The stock market slid sharply Wednesday as the virus’s resurgence clouded investors’ hopes for a relatively quick economic turnaround. The virus in the U.S. has been blamed for over 120,000 deaths — the highest toll in the world — and over 2.3 million confirmed infections.

California, the most populous state, reported over 7,100 new cases, a record. Florida’s single-day count surged to 5,500, a 25% jump from the record set last week and triple the level from just two weeks ago.

In Texas, which began lifting its shutdowns early on, on May 1, hospitalizations have doubled and new cases have tripled in two weeks.

Infectious-disease expert Dr. Peter Hotez of the Baylor College of Medicine in Texas said he worries that states will squander what time they have to head off a much larger crisis.

“We’re still talking about subtlety, still arguing whether or not we should wear masks, and still not understanding that a vaccine is not going to rescue us,” he said

In a sign of the shift in the outbreak, New York, Connecticut and New Jersey announced they will require visitors from states with high coronavirus infection rates to quarantine themselves for 14 days. That is a turnaround from March, when Florida issued such an order for visitors from the New York City area, where cases were soaring.

Cases are also surging in some other parts of the world. India reported a record-breaking one-day increase of nearly 16,000 cases. Mexico and Iraq also set records.

But China appears to have tamed a new outbreak in Beijing, once again demonstrating its ability to quickly mobilize its vast resources by testing nearly 2.5 million people in 11 days.  China on Wednesday reported 12 cases nationwide, down from 22 the day before.

In Europe, countries are easing or increasing restrictions as the outbreaks evolve.

John Nkengasong, chief of the African Centers for Disease Control and Prevention, said the outbreak on the continent is “picking up speed very quickly,” with a steep increase in cases and deaths as more countries loosen lockdowns.

Worldwide, more than 9.2 million people have been confirmed infected, and close to a half-million have died, by Johns Hopkins’ count.

Animal shelter patrons ‘on the run’

The rain was coming down Monday so the dogs at the Pike Animal Shelter headed for shelter. However, Jickinya Majors,... read more