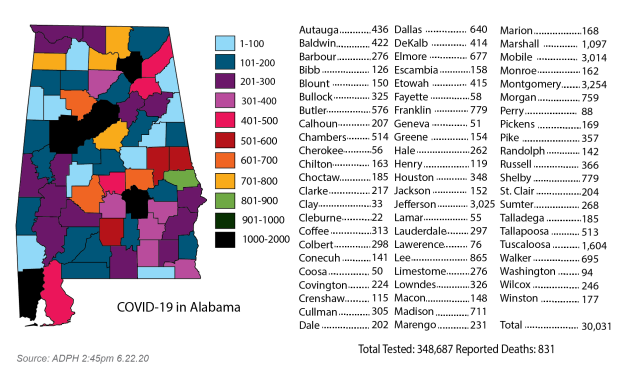 ST. PETERSBURG, Fla. (AP) — Alarming surges in coronavirus cases across the South and West raised fears Monday that the outbreak is spiraling out of control and that hard-won progress against the scourge is slipping away because of resistance among many Americans to wearing masks and staying away from others.

Confirming predictions that the easing of state lockdowns over the past month and a half could lead to a comeback by the virus, cases surpassed 100,000 in Florida, hospitalizations are rising dramatically in Houston, and a startling 1 in 5 of those tested in Arizona are proving to be infected.

However, cases in Alabama appeared to slow a bit. The Alabama Department of Public Health reported 433 new cases on Monday, bringing the state total to 30,031 with 831 confirmed deaths. Pike County has reported a total of 357 cases since March, with three confirmed deaths.

Over the weekend, the virus seemed to be everywhere at once: Six staff members helping set up for President Donald Trump’s rally in Tulsa, Oklahoma, tested positive, as did 23 Clemson University football players in South Carolina. At least 30 members of the Louisiana State University team were isolated after becoming infected or coming into contact with someone who was. Meatpacking plants were also hit with outbreaks.

“It is snowballing. We will most certainly see more people die as a result of this spike,” said Dr. Marc Boom, CEO and president of Houston Methodist Hospital, noting that the number of COVID-19 hospital admissions has tripled since Memorial Day to more then 1,400 across eight hospital systems in the Houston metropolitan area.

He predicted that in three weeks hospitals could be overwhelmed, and he pleaded with people to cover their faces and practice social distancing.

“It is possible to open up at a judicious pace and coexist with the virus, but it requires millions and millions of people to do the right thing. Right now, we don’t have that” because people have let their guard down, Boom said.

Texas is among a number of states — including Arizona, Alabama, Florida and South Carolina — whose governors have resisted statewide mask requirements, leaving the matter to local authorities.

The number of newly confirmed coronavirus cases across the country per day has reached more than 26,000, up from about 21,000 two weeks ago, according to an Associated Press analysis of data compiled by Johns Hopkins University. Over 120,000 deaths in the U.S. have been blamed on the virus, the highest death toll in the world.

In Orlando, 152 coronavirus cases were linked to one bar near the University of Central Florida campus, said Dr. Raul Pino, a state health officer in the resort city.

Associated Press journalists from around the world contributed.

“Just because we love you” was the theme for the drive-through, food bag distribution at the Troy Nutrition Center on... read more