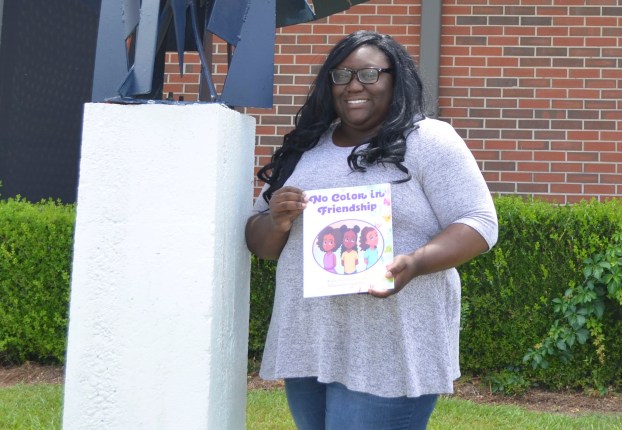 Chastity Collins, a 2010 graduate of Charles Henderson High School, published “No Color in Friendship,” a book based on her experiences with her closest high school friends.

Chasity Collins, a graduate of the 2010 Charles Henderson High School class, published a book and coloring book titled No Color in Friendship in May.

“It was a long journey, but I’ve been able to achieve one of my goals,” she said.

Collins was born in Ozark, but was raised in Troy and attended Troy Elementary then Charles Henderson. “I loved my time at this school and I will always be a Trojan,” she said.

Collins started writing poetry in elementary school and quickly fell in love with it because it came naturally to her. When she was given her first poetry assignment she was surprised how easy it was for her.

She explained that her book No Color in Friendship started off as a poem about herself and her two best friends Chelsea Kelly and Kimberly Shipman. Eventually she turned it into a story to put out on the market.

“It’s a story about my friendship with them. I started off being a shy kid who felt alone, but they brought me out of my shell,” Collins explained.

Collins hopes that her book will help other kids understand the importance of friendship and how it can change someone’s life. She also hopes that it will touch young girls who don’t believe they are beautiful.

To this day, Collins remains close friends with these two women who had such an impact on her life. “They were very good friends, and I appreciate everything they did for me. I wouldn’t be the person I am today if it wasn’t for them,” she said.

Collins is aware of and concerned about the kids who are being bullied today and who go home feeling alone. “I want them to be encouraged and to be encouraging to others,” Collins said.

She enjoys speaking to young girls and sharing her story with them. She wants to let them know they are not alone, and that everyone goes through difficult situations but they can overcome whatever struggles come their way.

Because No Color in Friendship is self-published, Collins explained that she did most of the work by herself, but she did have help from her mom, her aunt, and her editor.

“It was a long process and I almost quit at one point, but I had my family to support me,” Collins said. “They told me this story needs to be put out there and people need to hear it.”

With the extra push from her family, Collins was able to get her book and coloring book published. Collins is also working on writing another book that focuses on encouraging kids to stay in church and be involved even if it’s not popular.

Besides authoring books, Collins works for the State of Alabama and attends college at Enterprise State Community College with plans to graduate with her associates this December.

Collins is majoring in social work because she feels it is her calling as well as a calling for her family. Social work is something that her whole family has been involved with. Her mother and aunt are both social workers.

“I believe that’s something that has been put on our family as a calling,” Collins said. “We love helping people, love being active in the community, and love bringing people together.”

Collins wants to make an impact on her community through social work as well has through writing books. No Color in Friendship is available on Amazon and can also be ordered by emailing Collins at chasitycollins@yahoo.com.

They gymnasts of Xtreme Athletics in Troy were having a very successful season before the coronavirus shut down all activities.... read more