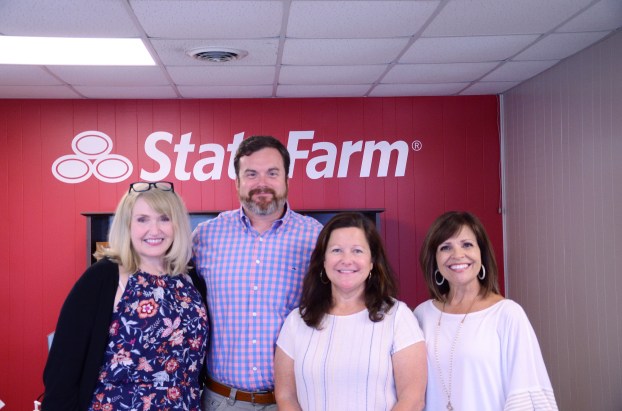 Bryant Smith will be working with Pam Lambert, Christy Pittman and Misty Hayes at the State Farm agency in Troy. Smith took over for Jerry Beckett, who retired at the end of May, but the staff will remain the same. Bryant said he and the staff will work to uphold the legacy and tradition of customer service that Beckett provided for the community.

On June 1, 2020, a retiring Beckett passed the torch to Smith, who now serves as a State Farm agent in Troy.

Smith explained that he has known Beckett most of his life and that Beckett has been his agent since he started driving at age sixteen. “I trust him and trust his judgment. He’s been a mentor to me and I’ve always looked up to him,” Smith said.

So, when an opportunity to switch career fields into insurance arose, Smith sought Beckett’s advice.

“I got a call the next day from the area vice president and the ball started rolling. It’s been about a two year process to lead up to all of this,” Smith said.

Smith put in his two-week notice and started working with a State Farm agent in Ozark. “She was super instrumental in helping me get employed, and it led me to where I am now,” he said.

Both Smith and his wife, Amy, grew up in Troy, graduated from Charles Henderson High School, and graduated from Auburn University. After college, they lived in Atlanta for a few years, but eventually decided to return to their roots.

“We decided to move back to Troy because an opening came up for my wife to teach kindergarten at Troy Elementary, we wanted to start a family, and all of our family lives here,” he said.

Upon moving back, Smith told his wife he would figure out where he would work, and since then, he has owned different businesses in Troy including Terra Cotta, Cotton Creek, and another store in Opelika.

“Prior to working at State Farm, I got to help people and serve people in the community through those retail businesses. That’s just what’s in my DNA,” he said.

Once his son, Sam, started kindergarten, Smith had more time on his hands, so he started looking for his next job adventure. Looking at his options, Smith decided he didn’t want to continue down the road of small business or retail, so he called a friend who was a financial advisor who had been trying to persuade Smith to come work for him.

“I called and asked what my role as a financial advisor would be. Then I started studying for my securities licenses, and after I got them, I went to work for him,” Smith explained.

With this new job, Smith was doing retirement planning and financial advising. He had a contract with the City of Troy and was working with a lot of city employees.

Eventually, the position grew to travel to see clients all over the southern part of the state and later to Mississippi. “I enjoyed it, learned a lot, and worked with great people, but I wanted to be at home more with my family,” Smith said.

That’s when another insurance company reached out to Smith about a position as a financial planner, which he was about to accept just to get off the road. Then Smith met with Beckett.

Smith has a desire to help and serve people. “With insurance, you automatically think about car or home insurance, but what really appealed to me about State Farm was that I could do everything. I can help people with retirement planning, IRA planning, financing their homes, and more,” he said.

Prior to starting at State Farm in June, Smith road along with Beckett around town after the severe storms that came through Troy in April and was able to see what he could do in the moment as an agent.

“The storm came through on a Sunday and we went riding around the next morning at the crack of dawn to check on people,” he explained.

“Relationships are a big part of this business, and to be able to ride around the day after something like that happens and hand out checks was great. That’s just what State Farm does,” he said.

Smith said he loves being able to pull into a customer’s driveway to check on them. He also enjoys giving back to the community and sitting down to discuss important plans with people.

“State Farm is really big on community involvement and giving back, and it was just a perfect mixture of everything for me,” Smith said.

With State Farm’s Good Neighbor Relief Fund, Smith is going to team up with Common Ground to donate money to their after school program for kids. He will also be involved in Quotes for Good where $5 will be given back to non-profit organizations for every quote they get.

“It’s been a whirlwind and a blessing,” Smith said. “We tell everybody that nothing has really changed here except for the name on the sign.”

Smith has the same team who worked for Beckett, and he explained that they genuinely care about helping people and are going to continue to do so.

“We want to build on the legacy that Jerry built here over the course of 37 years. We have a lot to live up to, but we’re going to try,” Smith said.

Clara Chandler of Goshen won the title of Alabama Junior Rodeo Association Queen at the Andalusia Rodeo over the weekend.... read more