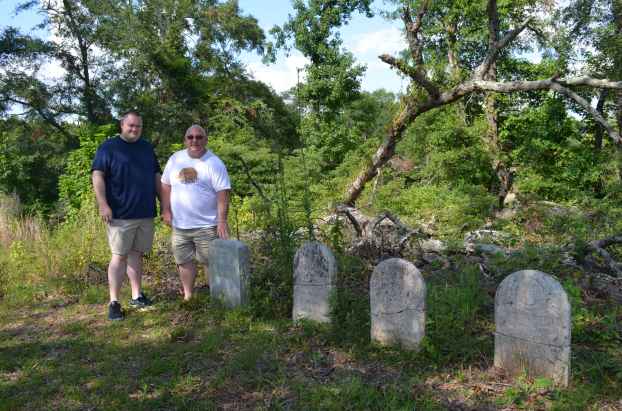 Scott Griffin of Baytown, Texas and his son, Cade, were in Pike County Thursday to visit the gravesite of his fifth great grandfather, John Griffin, a patriot of the American Revolution, who is buried at Pea River Cemetery. Griffin’s gravesite was unknown until research determined it to be next to his son Isaac in the rural Pike County cemetery.

On a brisk Sunday afternoon in May 2011, beneath the towering oaks at Pea River Cemetery in rural Pike County,  three fifth generation grandsons of John Griffin ceremoniously unveiled the headstone to mark the final resting place of  the patriot of the American Revolution.

On late Thursday afternoon, in stark contrast to the unveiling ceremony for marking of  the American Revolutionary soldier’s grave, there were no humbling words of sacrifice; no bagpipes were played; and there was no final musket salute.

Storms had scared the cemetery’s landscape, weeds were having their way and only the hum of mosquitoes broke the silence.

However, for Scott Griffin of Baytown, Texas, just being there was an emotional experience.

Griffin is a direct descendant of John Griffin and was in Pike County with the hope of visiting  the gravesite of his fifth great grandfather. Griffin is a United States history teacher and a family historian. He has a vested interest in his ancestor and has done extensive research to know more about John Griffin.

“I never thought I would have the opportunity to stand at John Griffin’s  gravesite,” Griffin said in a quiet voice. “Establishing a connection to an ancestor I never knew for most of my life … it’s emotional. To finally come here makes my heart glad. It gives me a sense of family, a sense of belonging to something bigger than me.”

Griffin said paying respects to an ancestor who led an extraordinary life was exceptionally meaningful.

“Being here is a fulfillment of many years of research,” he said. “As an educator, it certainly feeds my passion for teaching and helping young adults appreciate the lessons of the past.”

Griffin has five grandchildren and said he looks forward to sharing the story of his ancestor who was an American patriot.

John Griffin’s grave had gone unmarked for many years until research revealed that he was buried next to his son, Isaac Griffin, in Pea River Cemetery. When Scott Griffin learned where his ancestor was buried, he wanted to, one day, stand at the gravesite and honor him. Griffin’s son, Chad, was there to share the moment with him.

“My research has found his age at the time of death at 97 which conflicts with another account of 110,” he said.

John Griffin fought in the American Revolution and carried British lead in his body until the day he died. He came to Alabama from Virginia or North Carolina before it was admitted as a state. He settled in Pike County in 1822 in the Mulkey Community near the present day location of Bethel Church. He died at Carpenter’s  mill place about two miles east of Troy.

His family connections in Pike County are with the Pughs and Griffins.

Parole board rules on Huk A Buk killer’s request

The man convicted of robbing and murdering a Pike County restaurant owner in 2001 was denied paroled for a second... read more