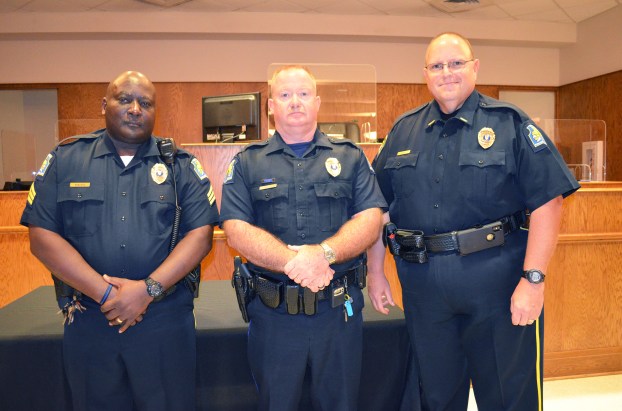 Lt. Sanford Wingard and Sgt. Edward Bass pose with Troy Police Chief Randall Barr after their promotion ceremony on Thursday afternoon. The officers were recognized for their service as they moved up to new ranks and responsibilities.

The Troy Police Department celebrated the service of two of its officers and honored them with promotions at a Promotional Ceremony at the Troy Municipal Court Thursday afternoon.

Troy Police Chief Randall Barr said Thursday was a day of special celebration for the Troy Police Department and it was an honor to promote two deserving officers. He expressed appreciation to the officers’ families for their love, support and understand and continuing “as we move forward.”

Troy Mayor Jason A. Reeves offered congratulations to Wingard and Bass and offered them encouragement as they take a step up as leaders in the TPD.

Reeves said strong leadership is needed now more than ever. “And, it is critically important,” the mayor said. He expressed his confidence that Wingard and Bass will provide that strong leadership.

Barr said the promotions for Wingard and Bass were the result of much hard work and great dedication.

At the next level, Barr said, officers will have more responsibilities and also more opportunities to make a positive difference in the community they serve. And, there is no doubt they will, Barr said.

Wingard is a native of Troy and 1984 graduate of Charles Henderson High School.

He joined the United States Army Reserve in 1985 and was an active member until 1992.

Wingard was hired by the Troy Police Department as a jailer in 1994. In 1999, he graduated from the Montgomery Police Academy and was assigned as a TPD patrol officer.

In 2003, Wingard was selected a member of the TPD Emergency Response Team and served on the team until 2013.

Wingard was promoted to the rank of corporal on the second shift in April 2006. In the same year, he was assigned as a field training officer.

In July 2010,  Wingard was promoted to sergeant.

In 2015, Wingard had the opportunity to go to Montgomery and assist with the final leg of the 50th re-creation of the Selma to Montgomery Civil Rights March.

In 2020, Wingard was honored as the Troy Police Department Officer of the Year.

Joining Wingard for the promotion ceremony were his wife, Sabrena Wingard and his brother Christopher Wingard.

Bass was born in Troy and grew up in Goshen.

He joined the Alabama National Guard in 1987 and served for eight years.

He is a 1988 graduate of Goshen High School and attended Troy University from 1989 until 1991.  He earned an associate degree in applied science from Jefferson State Community College in 2003.

Bass’ career in law enforcement began as a reserve office with the Luverne Police Department in 1991. He served there until 1993.

In  2010, he joined the Coosa County Sheriff’s Department as jailer and reserve deputy. He served with the sheriff’s department until 2013 when he was hired by the Troy Police Department.

Bass is a 2014 graduate of the Northeast Alabama Law Enforcement Academy.

In 2017, he was assigned to the TPD’s Special Enforcement Unit and as a Field Training Officer in February 2019.

In May 2019, Bass was certified as a Taser instructor.

He served in the Alabama Nation Guard for eight years.

Bass’ wife, Misti, his son and daughter, Wesley and Laura Kay, and his mother Barbara Boggan attended his promotion service.

Pike County recorded its third confirmed COVID-19 death on Thursday. According to the Alabama Department of Public Health, the county... read more