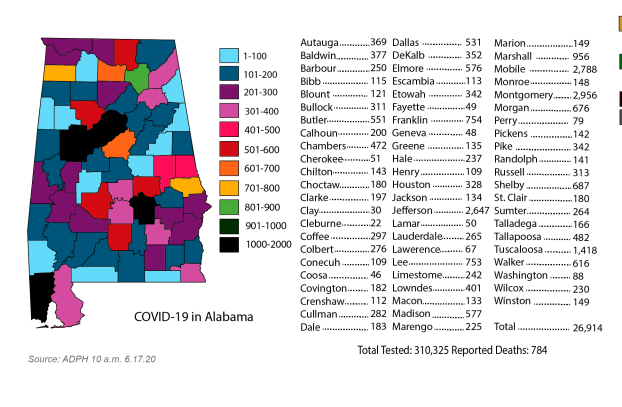 Only two new cases of COVID-19 were reported in Pike County on Wednesday, marking a significant slowdown in reported growth.

As of 10 a.m. Wednesday, the Alabama Department of Public Health reported 342 cases with two confirmed deaths. Of those, 130 cases have been reported in the last 14 days, marking a significant spike in the number of cases reported.

Statewide, the ADPH reported 26,914 cases with 784 confirmed deaths. Of those cases, 8,164 were confirmed in the last 14 days. The total number of new cases added on Wednesday was 390, a drop after days of record highs. Alabama record it’s highest one-day increase in positive cases on Sunday, reported 1,014 new cases that day.

Health officials have blamed the Memorial Day weekend and the reopening of the state as driving the recent spike in statewide cases. Alabama is one of 21 states with rising infection rates, prompting concern statewide and nationally. Earlier this week, Union Springs officials passed an ordinance requiring a mask in public.  In Montgomery, where cases are spiking, the issue of masks erupted during a City Council meeting, where members rejected a proposal to mandate them at public gatherings of 25 or more. Health officials said they are critical to stemming the tide.

Dr. Bill Saliski, a lung specialist at Jackson Hospital in Montgomery, called on the city to pass a mask requirement and declared: “If this continues the way we’re going, we’re going to be overrun.”

Montgomery County has added more than 700 coronavirus cases in the past week, more than any other county in Alabama, with a total of 2,922 infections. The virus has affected the African American population there at disproportionate levels.

Since the virus emerged in China late last year and spread worldwide, there have been more than 8 million confirmed cases and over 445,000 deaths, according to Johns Hopkins University. Experts say the true toll is much higher.

By Lauren Johnson Troy Continental Cinemas is getting ready to open again this Friday after making changes to the theater... read more