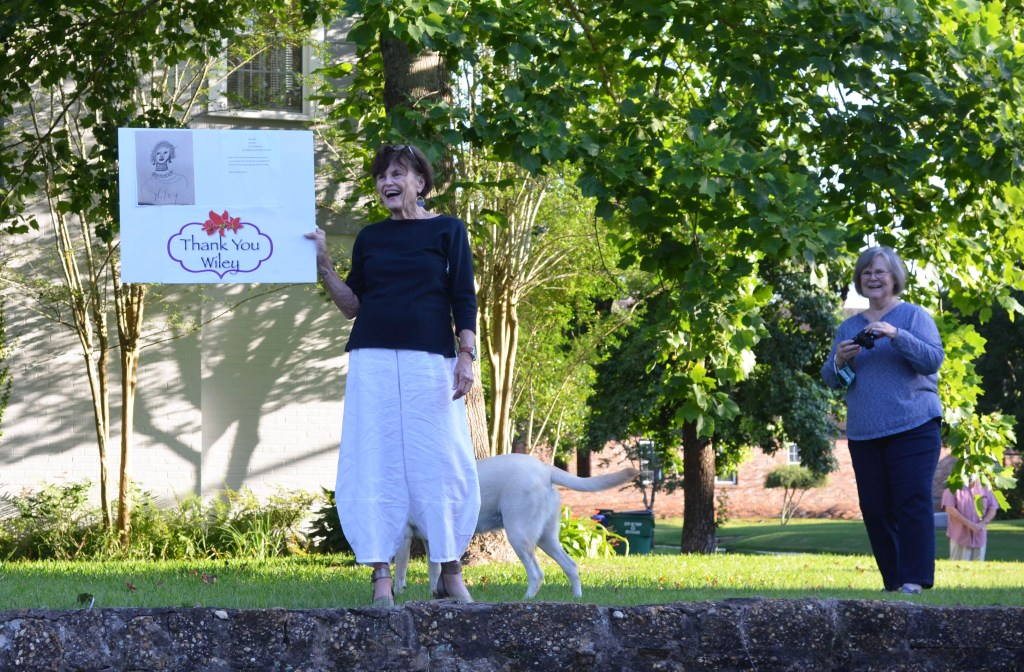 Wiley White wanted to walk quietly into her retirement from the Johnson Center for the Arts.

She retired to her home on the corner of Pine and Murphry streets and was enjoying the leisure life of a resurfacing artist and the company of her best friend, Babs. Then, late on Monday afternoon,  a car horn sounded, and another, and another, signaling the coming hoopla of a grand parade.

White was, at first, startled, then bewildered and confused.

The blast of a car horn is almost never heard in the peaceful neighborhood.

But the continuous honking of horns? Never. White was dumbfounded.

“Then, Brenda Campbell, director of the Johnson Center for the Arts, stopped her red Volkswagen,  jumped out and joined White on the “viewing stand.”

It was only then, that White realized the parade was for her. It was the retirement reception to which she had graciously said “no” because nearly two decades ago, she had “officially” retired from the JCA. But her love of the arts and her hometown and the promise the JCA held for all Pike County, brought her back. “One retirement is enough,” White had laughingly said.

But, not so. White had meant so much to the JCA and to the arts that the JCA staff, its board  and her many friends could not let her go quietly. So, why not a parade to say “Thank you, Wiley!”

White’s  daughter, Bess Diebel of Montgomery, and her sister, Jacqueline Floyd of Troy, came to visit Monday afternoon. They suggested visiting while enjoying  ice cold lemonade on the front lawn.  Suddenly, the chirping of birds was interrupted by the blast of automobile horns from one car after another. The ladies rose for the occasion.

“I didn’t know what was going on. It was crazy,” White said. “People that I know were blowing horns and smiling and  waving. What was going on? Then, I saw the signs on the cars – ‘Thanks, Wiley!’ I couldn’t  have ever imagined anything like that would happen to me.  It was just fabulous.”

White was too excited, too appreciative to even think about “tearing up.”

But, when Shelia Jackson emerged from the sky window of a vehicle singing “The Wind Beneath My Wings,” more than a few joined White in wiping away a tear or two. “I’ll never get over it,” she said. “It was so wonderful and it means so much to me –more than I can ever say. I’ll never forget it. Thank you! Thank you!”

The party didn’t end with the parade. Many of White’s friends stayed to visit and talk old times and good times and to look ahead to the future of the arts in Troy and Pike County.