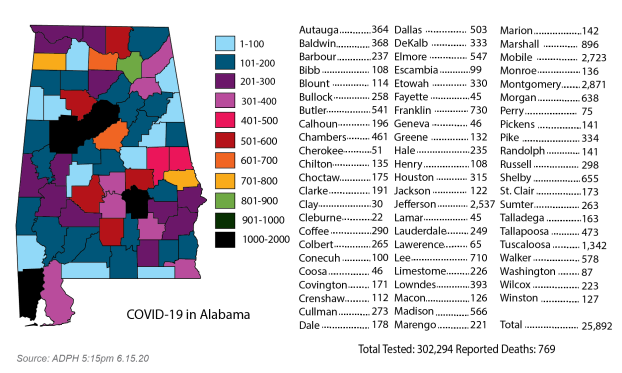 COVID-19 cases have increased by more than 60 percent in Pike County during the past 14 days.

As Alabama experiences a surge of coronavirus cases, Alabama Gov. Kay Ivey emphasized the role of personal responsibility to curb the spread of the virus instead of new closure orders.

As of Monday, more than 25,000 people statewide had tested positive for COVID-19, the disease caused by the new coronavirus. More than a fourth of the cases have come in the last two weeks, according to numbers from the Alabama Department of Public Health.

The state hit records highs this past week for hospitalizations — with more than 640 patients in hospitals— and for cases reported in a single day, with 1,000-plus cases being reported.

“Governor Ivey continues to reiterate that the threat of this virus is not behind us,” Ivey spokeswoman Gina Maiola said.

When asked if new closure orders are under consideration, the governor’s office emphasized the role of personal responsibility in stopping the spread of the virus.

“Until our next update, the governor continues to stress the need for personal responsibility. If we do not take it upon ourselves to keep ourselves and others safe by taking smart health precautions, we cannot expect to make progress,” Maiola said.

Health officials expressed concern about the rapid rise in cases and urged people to take precautions.

“It’s been an unfortunate series of days of record setting,” Dr. Jeanne Marrazzo, director of UAB’s division of infectious diseases, said at a news conference Monday.

“In my opinion. I think we now have just widespread sustained community spread,” she said.

Marrazzo urged people to take precautions, such as wearing a mask, when they go out.

“Unfortunately, a lot of people are going out and forgetting that wearing a mask is an essential part of being able to reenter society,” Marrazzo said.

Jefferson County Health Officer Dr. Mark Wilson said the increased numbers aren’t just a result of more testing because there has been a jump in the percentage of positive tests.

Health officials reminded people to: wash hands often, avoid touching the face, cover their faces when they cough or sneeze; avoid close contact with those who are sick; maintain a distance of at least 6 feet from others not in your household; use cloth face coverings when in public; and clean and disinfect frequently used items and touched surfaces often.

For most people, the new coronavirus causes mild or moderate symptoms that clear up in weeks. For some, especially older adults and those with existing health problems, it can cause more severe illness, including pneumonia,

The Square in Downtown Troy played host to the Stop The Violence Candlelight Vigil on Friday night. The vigil was... read more