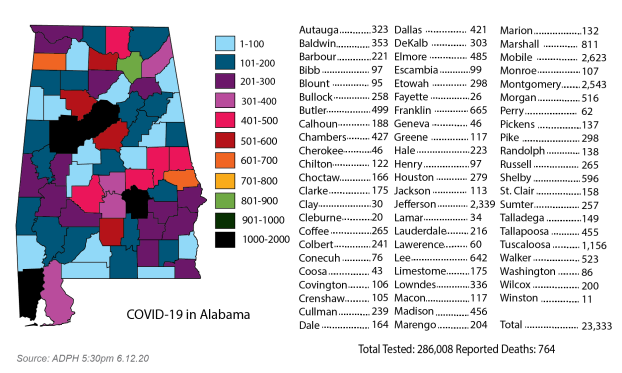 A second COVID-19 death was reported for Pike County on Friday, as confirmed cases surged toward 300 in the county and the state reported a second record-high day of new cases.

According to the Alabama Department of Public Health dashboard, Pike County added 15 new cases of COVID-19 on Friday, bringing the total to 298 with two confirmed deaths. Statewide, ADPH reported 859 new cases, bringing the state total to 23,333. It was the most new cases reported in a single day, edging Thursday when 848 new cases were reported.

“We’re definitely testing more people and seeing increases in the number of people who have had to stay full time in the hospital,” she said.

Minor said while the hospital did have a second suspected death related to COVID-19 this week, because of ADPH reporting methods she could not confirm if that case was the one reported on Friday.

She can, however, say definitively that surging virus rates are cause for concern in Pike County and Alabama.

“We’re seeing a lot more people get tested who are asymptomatic and were surprised when they were positive,” Minor said. “In many cases, they’ve had exposure to someone who tested positive and then had to be tested.”

Minor said because so many people are asymptomatic they are often unaware of the likelihood they are spreading the virus to others. “Folks who don’t think they are sick or don’t feel back don’t take any additional precautions are at risk for spreading the virus,” she said. “For young people who are asymptomatic, they may be fine … but they may expose their grandparents to the disease, and those are the people who are compromised and at risk.”

The statistics released on Friday brought concerning news for the state. Alabama’s 7-day average for new cases pushed past 600 per day for the first time.

Montgomery has added 1,000 new cases in the last 14 days, and the state has added a total of 6,700 cases in that time, meaning 30 percent of the state’s total cases have come in the past two weeks.

In Pike County, 107 new cases have been confirmed in the past 14 days, ranking the county 15th in the state for per capita infections.

The surge of coronavirus cases in Alabama is prompting renewed health warnings from health and public officials that the risk of COVID-19 remains, and people need to take precautions.

Harris told The Associated Press this week that it is more important than ever for people to take precautions.

“I think reopening the economy gave a lot of people the wrong impression, or they intentionally acquired the wrong impression, that, ‘Hey everything is fine. Let’s go back to normal.’ And clearly, it is not that way. Really, now more than ever we need people to stay 6 feet apart, wear face coverings and wash their hands,” Harris said.

The Alabama Department of Public Health said Alabama has experienced outbreaks at workplaces, long-term care facilities, and as a result of large gatherings, such as those occurring during the Memorial Day holiday.

“This virus is not going away. It is still dangerous. It is still going through our communities. We cannot attribute this to more testing,” U.S. Sen. Doug Jones said in a press conference Friday.

A spokeswoman for Alabama Gov. Kay Ivey said the governor and Harris are “closely monitoring the evolving COVID-19 situation.” when asked if new closure orders are under consideration, the governor’s office emphasized the role of personal responsibility in stopping the spread of the virus.

“As Governor Ivey said during her most recent press conference, the threat of this virus is not behind us. She continues to stress that this virus requires all of us to practice personal responsibility, not only for ourselves, but others,” Ivey spokeswoman Gina Maiola said.

State health officials reminded people to: cover their faces when they cough or sneezes; do not touch your face; wash hands often; avoid close contact with people who are sick; maintain a distance of at least 6 feet from others not in your household; use cloth face coverings when in public; and clean and disinfect frequently used items and touched surfaces often.

Alabama added nearly 850 new cases of COVID-19 on Thursday. According to the ADPH dashboard, which was updated at 10... read more