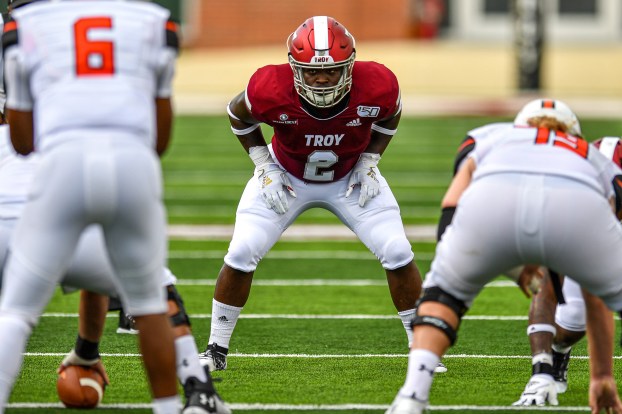 One of the best underdog stories in the country added another chapter Thursday when Troy junior linebacker Carlton Martial was named to the prestigious Walter Camp Preseason All-America First Team.

Martial, a former walk-on who checks in between 5-foot-9 and 5-foot-10, is one of just two Group of Five players on the Walter Camp All-America First Team and just one of two G5 players from the defensive side of the football on the first or second team.

Last year as a sophomore, the Mobile, Ala., native became just the 12th player and first underclassman in the last 20 years at the FBS level to finish a season with at least 100 tackles, 15 tackles for loss and three interceptions. He closed the year with 126 tackles, the most by a Troy player since 2000, and 18.5 tackles for loss, the fifth most in a season in Troy history, and three picks.

“Carlton is a prime example of what you can become when you put your mind to something even when the odds are against you,” Troy head coach Chip Lindsey said. “He has earned everything that’s come his way. Carlton has played with a chip on his shoulder, worked hard and made the most of every single opportunity that has presented itself to him. We are so proud of Carlton and this couldn’t have happened for a better TKG (Troy Kinda Guy).”

Martial was named the No. 35 player in all of college football by Pro Football Focus last season and was named to the PFF All-America Second Team. He was the only player in the country to rank in the top eight nationally in tackles and tackles for loss. He recorded double-digit tackles in seven of Troy’s games and added seven or more tackles in four other games.

He ended last season as the nation’s active leader in forced fumbles per game and ranked seventh among active players in tackles for loss per game.

As a freshman, he was named to multiple Freshman All-America teams including USA Today, The Athletic and the Football Writers Association.

Pro Football Focus on Carlton Martial:
The best defensive player when he was on the field, Martial capped his second straight year with an overall grade of 90.9 or higher and finished with the country’s second-highest overall grade at 91.3. Martial hardly lapsed at all this season for Troy, finishing multiple games with elite grades overall as he was equally elite against the run and in coverage. He made three interceptions and three pass breakups against just one touchdown allowed in coverage while he didn’t allow a single reception to go over 20 yards this season. He chipped in with 64 total defensive stops, three of which were sacks, another 13 that came in coverage and 48 that came against the run, the latter ranking as the fourth-most in the country. A true three-down threat at the Group of 5 level, Martial is set to make waves as potentially one of the better linebackers to ever do it within the Sun Belt.

The 2020 Troy football schedule continued to take shape on Wednesday afternoon when the program announced this homecoming opponent. The... read more