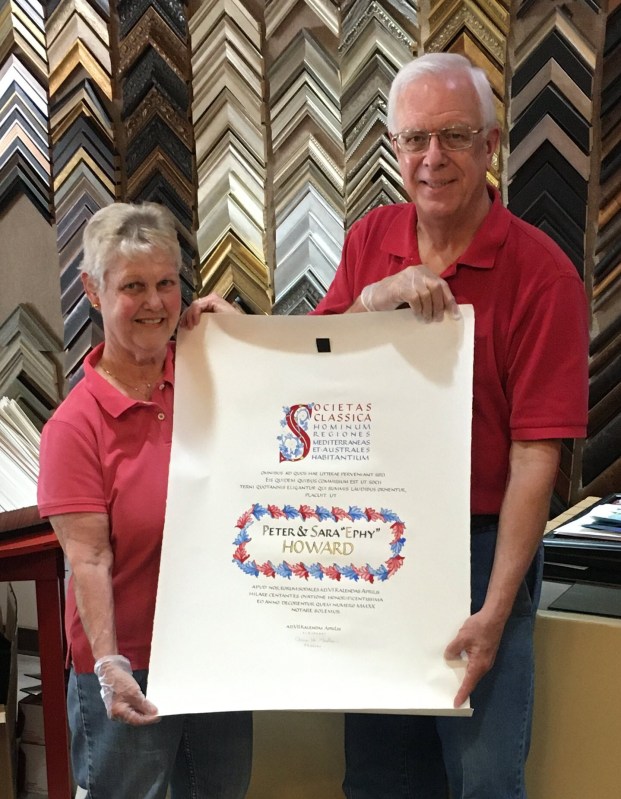 Peter and Ephy Howard were honored recently for their lifetime contributions nationwide to the study of Latin and Greek. The award was presented at a nationally attended virtual meeting of the Classical Association of the Middle West and South.

Peter and Ephy Howard of Troy were recently honored with a Latin citation by the Classical Association of the Middle West and South for their lifetime contributions nationwide to the study of Latin and Greek.

The “Ovatio, an ancient Roman honour,” is normally presented as a surprise at the organization’s annual meeting, but due to the COVID-19 pandemic this year’s award was presented at a nationally attended virtual meeting. Nonetheless, the award came as a complete surprise to both.

“But the real surprise came for Ephy, who thought she was working with the committee to keep the secret from me,” Peter Howard said.

“She didn’t know  that all the time they were setting her up.”

Ephy Howard said it was fun keeping the secret from her husband and a great surprise for her, too, and tremendous honor both to be recognized for their  many years of service. “But we haven’t finished working yet,” the honored couple said. “The school year will be here before we know it.”

Ephy Howard taught Latin for 25 years at Charles Henderson High School. Since retiring in 2010, she has continued to teach Latin for the Alabama

She has worked closely with the North American Cambridge Classics Project and, for the past 20 years has chaired the National Latin Exam’s  scholarship committee.

Since 1974, Dr. Howard has taught Latin, Greek, Classical Civilization, German, and English at Troy University, where he also serves as chair of the

Department of World Languages and Cultures.

He has worked for more than 30 years with the College Board’s AP Latin Exam and has served as president of the American Classical League.

The Howards live in Troy, along with their daughter Caroline.

After resolving a backlog in reporting results, the ADPH reports 250 confirmed cases of COVID-19 in Pike County, with one... read more