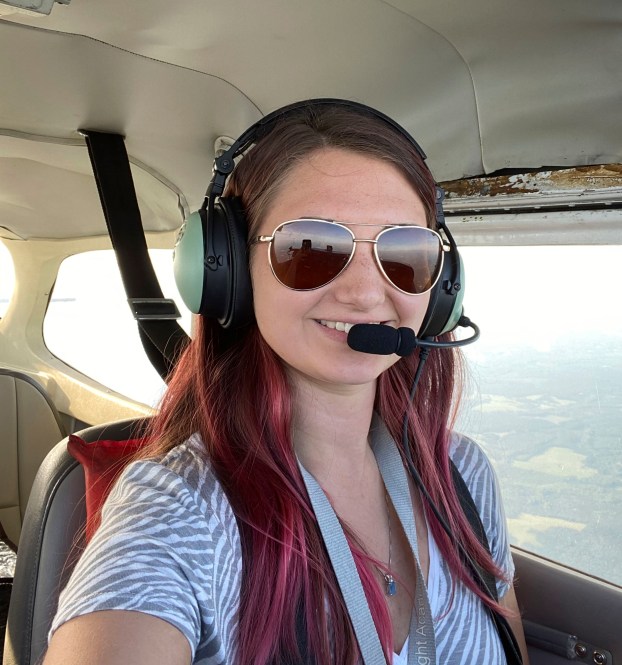 Caidra Owens, a 2020 graduate of Goshen High School, says becoming a pilot is a “God Thing” for her. She earned her pilot’s license along with a high school diploma and an associates degree through the First in Flight Academy at Pike County Schools.

The lowest point in Caidra Owens young life brought her to the highest point she could ever have imagined.

When Caidra was in eighth grade, she lost her dad and was having difficulty dealing with his death.

“My aunt and uncle wanted to do something to help so they took me to Pensacola and we visited the Naval Aviation Museum,” Caidra said. “When I walked in, it was like God said to me, ‘Take a look around because this is what you will be doing for the rest of your life.’ For me, being a pilot is a God thing.”

That moment set the course for Caidra’s life and, for her, the sky’s the limit.

But, everything had to fall into place for Caidra to achieve, not only her dream, but her goal.

“Kim McCabe was involved with the beginning of Pike County Schools’ First in Flight Academy,” Caidra said. “He told me if I wanted to be a pilot, I needed to go to the academy, but it was for students enrolled in the Pike County Schools.”

“So, I enrolled at Goshen High School and I was eligible to attend the First in Flight Academy,” Caidra said. “That was going to be a long drive to school every day, but it would be worth it.”

Not only was Caidra enrolled at Goshen High School and the Flight Academy, she was also enrolled at Troy University.

“It was  a lot to juggle but I knew what I wanted and what I had to do to make it happen,” she said.

There was a lot for Caidra to learn at the Flight Academy, beginning with the ground work that is required of any pilot in training. And, so many training flights with her instructor before “at last” taking the controls. For Caidra, that was a moment that she can’t even begin to describe.

Being alone in the plane for take offs and landings, “ups and downs” had not been unnerving for her but the nerves surfaced on that first solo flight.

“I was so nervous and I was praying a lot but then I started to calm down,” she said. “And, I thought, ‘I can do this. I can do this.’ And I did. Then, I knew, for sure, that flying was what I wanted to do for the rest of my life.”

Caidra’s cross country flight logged her about an hour and a half and 150 miles.

She took a few minutes of that time to just enjoy the ride but then turned her full attention to piloting the plane. And, she was right where she wanted to be. In the air and at the controls.

Caidra Owens is a 2020 graduate of Goshen High School and she has a pilot’s license. She will receive an associate degree from Troy University and then she will attend Auburn University where she will pursue a professional flight degree.

“I’m not exactly sure about my career yet, whether I want to be a pilot for a commercial airline or a private pilot or maybe an instructor,” Caidra said. “But I have plenty of time to decide. I’ll know when the time comes.”

Right now, Caidra is enjoying her status as a high school  graduate. Of course, there is some disappointment at not having the opportunity to do the senior things that high school graduates do.

“But I have close friends and we’ll keep in touch. I have a lot of great memories to look back on and a lot to look forward to,” Caidra said. “And, I know, for sure, it’s going to be fun up there.”

‘The COVID-19 journey will be long’

Testing continues to increase as COVID-19 rates climb in Pike County and in the state. As of Tuesday morning, Pike... read more