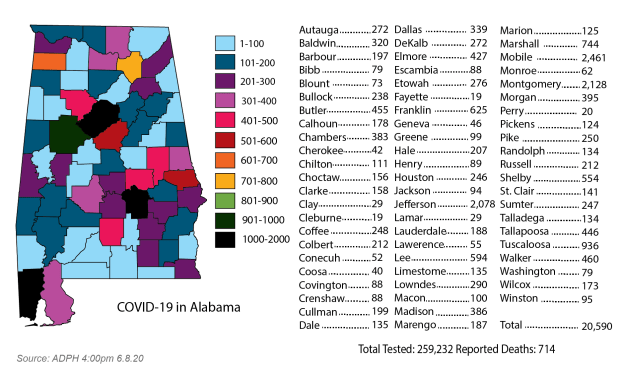 After resolving a backlog in reporting results, the ADPH reports 250 confirmed cases of COVID-19 in Pike County, with one death.

Statewide, more than 20,590 cases have been confirmed with 714 confirmed deaths and 5,467 cases confirmed statewide in the last 14 days.

In Pike County, 103 cases have been confirmed in the last 14 days, with 838 tests conducted, according to the Alabama Department of Public Health.

The ADPH tracking dashboard had shown only minimal increases last week due to a backlog in the reporting process.

In a statement on Saturday, the ADPH said issues had been resolved.

The Centers for Disease Control and Prevention (CDC), Alabama Department of Public Health (ADPH), and its vendor have resolved issues related to delays that affect the number of cases and tested reported on this dashboard.  As a result of a reporting backlog, this dashboard appears to display sizeable increases in all numbers. The reason is that there has been a lag time in adding some reports.

“The national surveillance pipeline became overwhelmed earlier this week due to a large increase in the volume of COVID-19 laboratory results. ADPH staff worked tirelessly with CDC and its vendor to resolve the issues as quickly as possible.”

Two counties – Montgomery and Jefferson – account for 113 of the state’s new cases on Monday, including 74 in Montgomery County and 38 in Jefferson.

New look Trojans eager to return to the court

The Troy women’s basketball team was having one of their best seasons in program history when the coronavirus shut things... read more