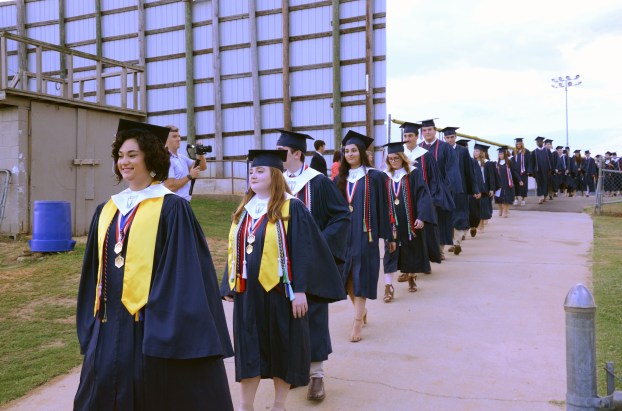 By LAuren Johnson | The Messenger The Pike Liberal Arts School Class of 2020 returned to their roots with a graduation ceremony on the school football field this week. At top, Valedictorian Isabel Robledo leads the graduates as they process into the ceremony. Above, members of the Class of 2020 ceremonially move their tassels to reflect the completion of commencement.

‘They all sacrificed so much’

The seniors of Pike Liberal Arts Class of 2020 came together one last time Thursday or their graduation ceremony.

Pike moved the ceremony to this later date hoping that the Covid-19 regulations would be lifted, and to their delight, they were able to have a traditional graduation.

For the past few years, Pike has been able to use the Claudia Crosby Theater for graduation, but due to Covid-19, this year the school held the ceremony on the Patriot football field.

“It brings us back to our roots, which is neat for Pike’s 50th class,” John Ramage said. “Pike used to graduate on the field until we out grew it and went to the university.”

Ramage, as well as all the senior parents, were very thankful that the administration was committed to honoring these seniors.

Mike Jordan, another father of a graduating student, said, “We’re very appreciative of the hard work that the administration and the board members put into making sure there could be a ceremony.”

Jordan had faith that there would be a ceremony, but he was interested to find out what it would be like. While other schools have done it virtually or not at all, he was glad that Pike thought about what the seniors would want.

“Pike thought about what was best for our seniors, and were able to give them closure and an end to their high school career,” he said.

Even though these seniors had to make adjustments and sacrifices and miss out on senior events and experiences, they were just happy to be able to have this senior moment.

“They’ve all had to sacrifice so much already, but it’s unbelievably great that they get to come here tonight,” Scott Renfroe said.

Renfroe was also confident that the school would do their best to have a ceremony. “Pike is so family oriented. The staff, the principal, and everyone did everything in their power to make this happen,” he said.

Kim Sasser, a mother of a graduating senior, was just as grateful for the encouragement and support from the school. “It’s been a long journey for this class and now we’re ready for them to go on to big things.”

Headmaster Eric Burkett expressed how proud he was of these seniors and all they have accomplished. He announced that every student who applied to college was accepted. The average ACT score for the class was a 23, which is 2.2 points higher than the national average and 3.9 points higher than the state average.

These 36 graduates had a grand total of 121 confirmed scholarships making an average of 3.36 scholarships per student. The total value was $2,909,324.

In the speeches by valedictorian Isabel Robeldo, salutatorian Megan Starling, and the guest speaker Dr. Jack Hawkins, each gave encouragement to the graduating seniors.

They talked about the importance of living in the moment, appreciating what you have, and only worrying about the present.

“The journey is always more important than the destination,” Robeldo said.

Banks teacher among finalists for Alabama Teacher of Year award

The 16 finalists for Alabama’s 2020-21 Teacher of the Year were announced on Monday and Sontessia Youngblood, fifth-grade teacher at... read more