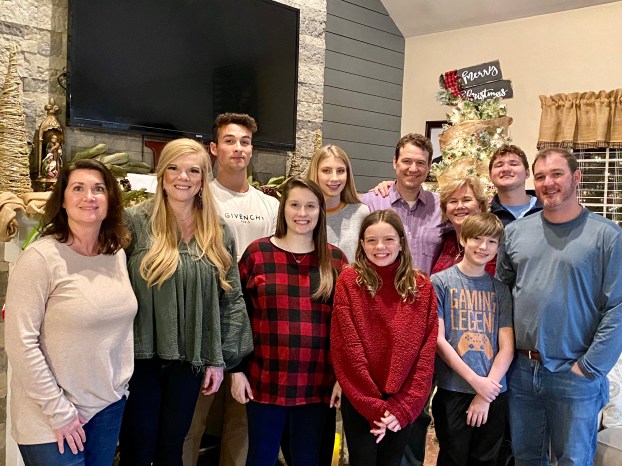 Giuseppe Soccio has a contagious laugh and the obvious good-hearted humor that is the hallmark of Italian young men. But, unlike most Italians, Giuseppe speaks with a Southern accent.

Giuseppe is an exchange student who came to Troy in a rather unusual way.

Although Reyna Freeman’s Italian father didn’t require her to learn his native language, doing so became important to her. But, learning to speak Italian was not as easy as Reyna thought. To learn the language in a conversational kind of way, she needed to be immersed in the language. And, what better way than to host an exchange student from Italy?

Fate stepped in. Reyna had the opportunity to host an Italian young man, Giuseppe Soccio, but there was no time to waste – or to talk it over with her husband, Conley Freeman.

“You did what?” was his response.

That was two years ago. Giuseppe almost immediately became a member of the Freeman family and will always be even though they are an ocean apart.

Giuseppe said coming to America, he didn’t know much about Alabama or even the South but his impression was that “every state in America is good.”

He landed in New York in July 2018 and that was his first impression of the United States. Alabama was altogether different but the Freemans were welcoming and Giuseppe felt “at home.” He realized almost immediately that being in Alabama and in Troy was going to be a rewarding experience.

Giuseppe enrolled at Charles Henderson High School and realized immediately that “school in America was different.”

Giuseppe had a good year at CHHS and he quickly became Americanized. His English, which he began learning in elementary schools, was “perfect” and somewhere he learned to say, “Yes, ma’am and “no sir.”

“A perfect Southern gentleman,” Reyna said with a smile.

However, because of visa restrictions, Giuseppe attended Pike County High School his second year in Alabama. He is now a 2020 graduate of PCHS and graduated with straight A’s. He also took classes at Troy University where he also excelled.

COVID-19 restrictions kept Giuseppe’s parents from being able to attend his high school graduation. However, PCHS made the necessary arrangements so that, via technology, Giuseppe’s parents could watch him walk across the stage and receive his diploma in real time.

“I was excited and appreciative that my parents were able to see me receive my high school diploma,” Giuseppe said.

Although he is excited to being going home, he is also sad to be leaving his Freeman family and Alabama.

“Being here in Alabama has been a great cultural experience,” he said. “I will always remember my time here and I will come back.”

Looking back on his two years in America, Giuseppe said he likes the social part of American life.

And, he appreciates the opportunities to do more and be more.

“I am a member of the USA Powerlifting Association and competed in meets in Birmingham,” he said with a smile. “I worked out in the gym and got stronger.”

And, for a self-described “wiry” young man, Giuseppe can dead lift 500 pounds and with no sweat.

Although Giuseppe had never held a football before, he was a kicker on the Pike County high school football team.  He attended his junior and senior proms and both are memorable.

“All of high school was a cultural and learning experience.”

His travels in the USA, include New York and California and closer to home, Pine Mountain, Mobile, Biloxi, all along the Gulf Coast.

“We went to my host family’s cabin on a lake in Minnesota and that was a great time,” Giuseppe said. “We also went to Pennsylvania and to Gettysburg and that was a real learning experience. We saw the Alabama Memorial and that was special.”

“Special” is the word that Giuseppe used to describe many of his experiences in Troy and across the USA. All in all, his two years in Alabama have been a cultural experience that will be invaluable as he moves into the next exciting chapter of his life.

“My families have had opportunities to visit and know each other and we will continue to do so,” Giuseppe said. “I had planned to go home to Italy in June but now I have to wait because of the coronavirus.”

And, that wait will give the Freemans and their exchange student a little more time together and, for all, “that’s a good thing.”

‘They all sacrificed so much’

The seniors of Pike Liberal Arts Class of 2020 came together one last time Thursday or their graduation ceremony. Pike... read more