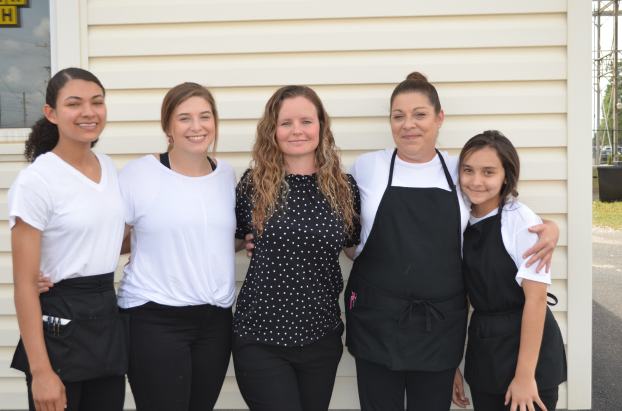 Messenger photo/Lauren Johnson For owner Toni Cuevas and her husband, opening the Trojan Mexican Grill in Troy has offered an opportunity to involve their children and nephew in the business. The restaurant, located on U.S. 231, opened May 4.

The Trojan Mexican Grill opened its doors on May 4, in the middle of the pandemic shutdown.

Even in the midst of Covid-19, owner Toni Cuevas said the opening went well and the reception from the Troy community was great.

“It was actually a blessing for us because it has given the staff the opportunity to learn everything and figure out how to work well together. We were able to work out the kinks before the doors fully open,” Cuevas said.

The Trojan Mexican Grill, located on U.S. 231, is a family owned and operated restaurant. Cuevas is the owner, her husband is the head chef, three of their five children and one nephew are workers, and several of the cooks are also relatives.

“Working with family is good because we respect each other,” Cuevas said. “Sometimes it can be hard, but we’re easy people and we’ve been able to separate the business from family.”

Cuevas is originally from Enterprise, and her husband is from Michoacán, Mexico. “We met each other in the restaurant business about 13 years ago. He was the head chef and I was a server. Now, here we are three restaurants later,” Cuevas said.

In 2011, the Cuevas family lived in Chipley, Florida. Before they opened their own restaurant, Toni Cuevas taught at a Christian school there while her husband was a chef. A few years later, Cuevas felt the Lord calling her and her family to move to Elba, where they opened a Mexican restaurant that they still own and operate today.

Cuevas recently felt the Lord calling her again to come to Troy, so she and the family made the move to settle here.

“We like the area and enjoy it . and it’s nice to be close to things we need,” she said.

Everything that is served at the restaurant is homemade, and every morning it is made fresh.

“My husband is very passionate about being a chef. I believe he’s just anointed and called by the Lord to do it. It’s not just a job for him, and that’s why we work hard to do everything right,” Cuevas said.