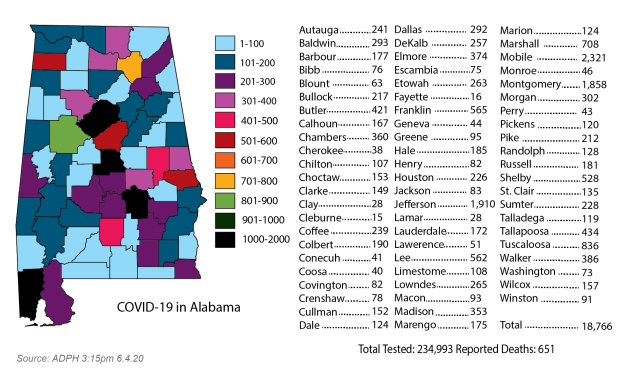 The updates coincide with changes in the way the state reports COVID-19 numbers. As of Thursday, the Alabama Department of Public Health is only updating its database once a day. For months, the ADPH had been providing live updates throughout the day.

“ “Due to the large increase in volume of COVID-19 laboratory results being processed by laboratories (state public health labs, commercial labs, hospital labs, etc.) and sent to state health departments, the national surveillance pipeline is becoming overwhelmed and is causing delays. This has impacted the data that is displayed on this dashboard,” ADPH said in a statement.

Two Alabama counties _– Bullock and Lowndes – were cited this week in an internal CDC memo outlining specific areas of concern, including the top nine counties and one independent city with rising infection rates.

According to Yahoo.com, the 18-page document, titled “CDC COVID-19 Response Update May 27, 2020,” contains state-by-state analysis, as well as more detailed county breakdowns. The report comes as the nation enters its fourth full month of battling the disease, which has sickened nearly 2 million Americans and killed 108,000.

The Yahoo article said the CDC’s areas of concern, described as those counties “with the greatest burden who are still demonstrating growth,” are listed according to the number of new cases per 100,000 individuals over the past two weeks, which in this case were the last two weeks of May. In descending order, those are: Hamilton County, Fla.; City of Manassas, Va.; Dakota County, Neb.; East Carroll Parish, La.; Bullock County, Ala.; Jerauld County, S.D.; Buena Vista County, Iowa; Lowndes County, Ala.; Woodbury County, Iowa; Wright County, Iowa.

Lowndes County, with 261 confirmed cases and 12 deaths, has the highest per capita rate of COVID-19 infection among all 60 Alabama counties. Bullock County, with 216 cases is third and Butler, with 421 cases and 18 deaths, is second. Pike County ranks 17th in per capita cases.

Alabama has been reopening following its month-long shutdown over the virus, and it is unclear how the reopening will affect new case counts. Alabama has also seen a number of large, public gatherings in recent weeks – from high school graduations across the state to large protests in many cities on racial justice following the police killing of George Floyd in Minneapolis. ADPH urged the use of facemasks and social distancing during those protests, but not everyone present adhered to those guidelines.

In Pike County, Troy University reported another student had self-reported testing positive for COVID-19, bringing to 19 the total number of self-reported cases among faculty, staff and students. Troy Health and Rehab has reported a total of 15 positive cases among residents and three among employees, including seven new patient cases and two employees this week. One resident has fully recovered.

“The 14 positive residents are all on the same unit and isolated from the rest of the facility,” said Warren Kelly, CEO. “The residents and employees are receiving appropriate medical attention.”

For most people, the new coronavirus causes mild or moderate symptoms that clear up in weeks. For some, especially older adults and those with existing health problems, it can cause more severe illness, including pneumonia, and be life-threatening.

By Lauren Johnson The Trojan Mexican Grill opened its doors on May 4, in the middle of the pandemic shutdown.... read more