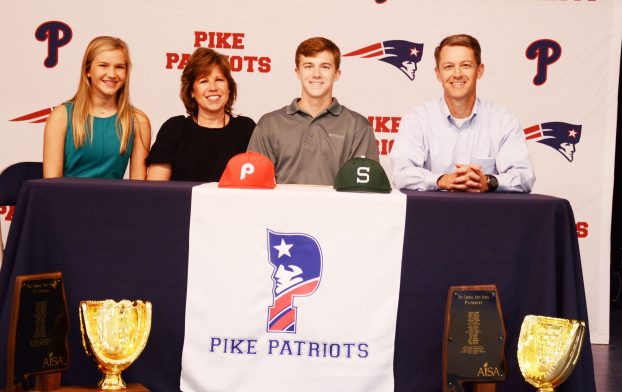 Davis Allen, a back-to-back baseball state champion from Pike Liberal Arts, had his dream of playing college baseball come true on Tuesday when he signed with Shelton State Community College.

Allen explained that he has been talking with the school for a while. “I chose the school because I liked the coaches, the facilities, and what they had to offer.”

Allen has played baseball since he was about 5 years old and he said he is excited for this opportunity to continue playing at the next level.

“I’m going to continue to work hard by doing the same things I’ve been doing, which is staying in the weight room, staying in the cages, and getting stronger and faster,” Allen said.

“Davis is extremely hard working and is what I would describe as self-made talent,” Coach Allen Ponder said. “Everything he’s got, he’s worked hard for, not only on the field, but also in the weight room and in the class room.”

At Pike, Allen has made a lot of great memories while playing baseball.

“Winning the state championship back-to-back was really special and really fun,” he said, referring to the 2018 and 2019 AISA championships.

“We should have won a third time, but the pandemic stopped our chance.”

Allen finished his shortened senior season batting .417 in 15 games. He had an on base percentage of .509 and he slugged .604. He finished with six extra base hits and nine RBI. He had 57 plate appearances and 48 official at-bats and one home run. As a junior, Allen earned First Team All-State honors, and now, he will be playing in the outfield for Shelton State next spring.

Allen is thankful for the love, support, and encouragement from his family. Additionally, his family is proud of him.

“We are proud of the hard work he’s put into it, his discipline, his sacrifice, and his dedication,” his father state Rep. Wes Allen said.

“Davis has shown his development throughout his baseball career, and we are looking forward to watching him play at Shelton State in the spring.”

This year, as a senior, Allen has come to embrace his role as a leader on the team. “Davis is a leader on and off the field. He is the blueprint for kids who want to go to the next level and play college baseball,” Ponder said.

Ponder said he believes Allen will fit in nicely with Shelton State’s program and that his game will translate to the next level really well.

“Davis is going to be a great college baseball player. I think the sky is the limit,” Ponder said.