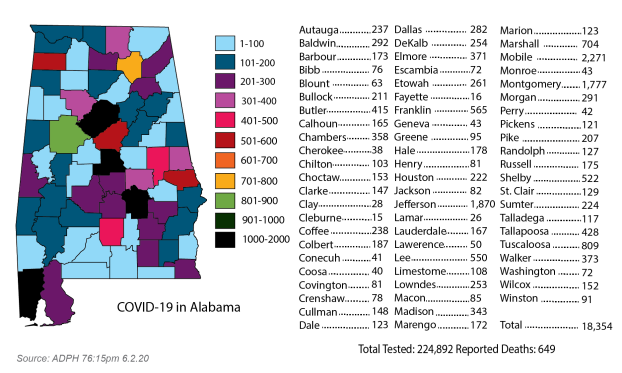 Alabama is one of 20 states seeing a sharp increase in COVID-19 cases.

In Pike County, 208 cases have been confirmed with no deaths.

The sharp rise in Alabama cases comes after the state lifted restrictions in late May, opening beaches; restaurants; gyms; hair salons; and entertainment centers, among others.

That, combined with graduation ceremonies and the Memorial Day holiday weekend, drew more people together.  “I think we do continue to have disease transmission at a community level throughout many parts of the state, in addition to some hotspots,” he said.

As the state reopens, “we’re going to need to have people be more careful than ever.” Not only are the elderly and those with health problems vulnerable, he noted the state “is not a healthy state overall.”

“I can’t emphasize enough the importance of social distancing, staying out of crowds, staying home if you are sick,” and using face coverings when around “a bunch of people not from your own household,” he said.

Even if one is not concerned for yourself about getting sick, he said they need to show personal responsibility for others they will be around, including family and community, as they will be affected by your decision on wearing a mask.

“We really need you to do the right thing, and do it for those in your community,” he said. “It is important we all do this together.