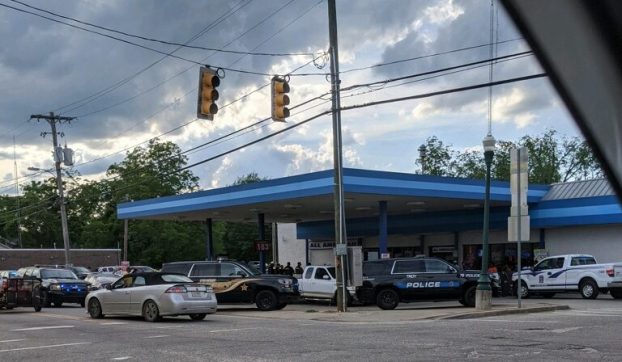 A string of hit and cut incidents began at the Corner Store on the corner of U.S. Highway 231 and Country Road 125 around 4:49 p.m. Saturday and ended at the All-American station in on S.A. Graham Boulevard in downtown Brundidge at 5:30 p.m.

“We don’t know how he came into Brundidge but he struck a vehicle on North Main Street,” Davenport said.

“He then proceeded to East Troy Street and headed west where he stuck another vehicle that was stopped at the traffic light and then hit a vehicle at the All-American station cross the street.”

Charges against Thomas are driving without a license and leaving the scene of an accident three times.

Davenport said there were two passengers in the vehicle, the owner of the vehicle and a 16-year-old juvenile.

“All of the occupants of the car were suspected of being under the influence,” Davenport said.

“At the All-American station, the 16-year-old became irate and disruptive. He has been charged with disorderly conduct, resisting arrest and criminal mischief because he damaged the police car by kicking the seats.”

Davenport said a large crowd gathered at the All-American station and on the streets but was orderly.

Davenport said because the incident at the All-American station attracted a large number of people to the scene, backup was requested and the Pike County Sheriff’s Department and the Troy Police Department responded.

Davenport expressed appreciation for the support of the law enforcement agencies and also for the conduct of the crowd.

Alabama has topped 18,000 cases of coronavirus with nearly a third of the cases being added in the last two... read more