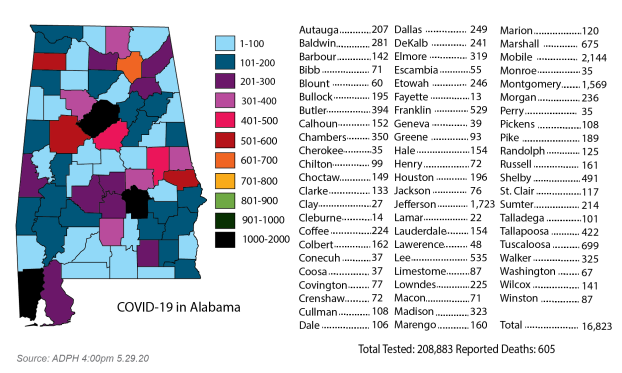 Law: ‘We’re probably in for a hard time’

“Going in the wrong direction.”

That is how Dr. Eric Law described the metrics used to determine the impact of COVID-19 in Pike County and in Alabama, and that trend concerns him.

It’s a trifecta of concern that prompted national, state and local leaders to enact stay-at-home mandates in April and much of May. But in Alabama, those restrictions began to lift in mid-May, and now as residents and business owners settle into a new normal, the virus continues to spread.

As of 5:45 p.m. Friday, Pike County had 191 confirmed cases of COVID-19 with no deaths. That represents a 52 percent increase in the number of positive cases in the past seven days.

“I think if the trend we’re seeing right now with a rapid increase in infection rate becomes the norm, we’re probably in for a really hard time this summer,” Law said.

Statewide, more than 17,030 cases had been confirmed by Friday evening, with 5,668 confirmed in the past 14 days. The state has reported at least 610 deaths related to COVID-19.

The seven-day average for new cases hit an all-time high this week, and new cases on Thursday topped 400 for the fifth time in seven days.

“We’ve had this week a couple of the highest days we’ve seen in number of cases, and that’s certainly concerning to us,” said State Health Officer Dr. Scott Harris on Thursday.

“Some of that can reflect increases in numbers of tests being performed,” he said, “but I certainly don’t think that accounts for all of it.

“I think we continue to have disease transmission at a community level throughout many parts of the state, in addition to some hot spots.”

Law worries that the swath of central Alabama – includes Pike County, as well as Bullock, Lowndes, Butler and others – could become one of those hotspots.

“Right now, Bullock County is a hotspot,” he said Friday. The county has reported 201 cases, including 45 related to one nursing home, as well as four deaths.  Lowndes has reported 225 cases; Butler, 392; and Barbour 132. “When people look at a map they see Mobile and Baldwin County, Montgomery, Jefferson County light up,” Law said. “But when you actually look at the per capita rate of infection, this swatch of Central Alabama leads the state.”

Data analysis ranks Lowndes, Butler and Bullock as the three counties with the highest per capita infection rates in Alabama. Pike is ranked 17th, and Barbour County, 19th.

“I think some of the infections we’re seeing now began before the restrictions were loosened,” Law said. “And I think if these trends continue, as we open up and infection rates continue to climb… we’re in for a really hard time.”

The only way to slow the rate of infection is continued vigilance in safety measures, social distancing and personal hygiene. “I know people are getting tired,” Law said. “But the types of precautions we’ve been taking very much have to become our new normal for the next couple of months.”

On Thursday, Timothy Lolley stood alone on the streets in downtown Troy in protest of the death of a black... read more