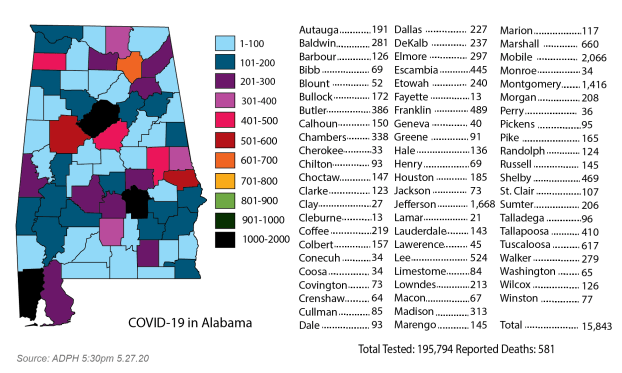 Two employees of the Pike County Commission have tested positive for COVID-19.

“We have two confirmed cases of coronavirus in our office,” said Robin Sullivan, chairman of the commission. “They are at home and are not in the office, and we are taking the correct precautions as recommended by the state and the CDC.”

Sullivan said all the employees in the commission officer were tested last week after learning that employees at the Health Department, which shares an office with the commission, had tested positive for COVID-19.

“As soon as we learned about it, everyone (in the commission office) was tested and sent home until the test results came back,” he said. “That’s when we learned two employees had tested positive.”

Both are asymptomatic, headed.

“Since then, we’ve had the office sanitized as well as the meeting areas and shared areas.

“I can reassure the public that everything has been sanitized and cleaned to CDC and state guidelines,” Sullivan said. “And these are the only county employees who have tested positive.”

With more than 50 new cases reported in the past week, Pike County ranks 20th in the state for cases per 100,000, with Lowndes, Butler and Bullock ranking as first, second and third.

Those new cases included six residents and one employee at a local nursing.

Alabama has added more than 5,000 coronavirus cases over the last 14 days as the state lifted restrictions.

“The last two days we have maybe had our highest days so far. We know a little bit of that has to do with increased testing, but I don’t think that explains all of it,” State Health Officer Scott Harris said.

The state this month lifted most of the restrictions that had been in place, allowing restaurants, hair salons, entertainment venues and other places to open with social distancing requirements. The Memorial Day weekend drew crowds to Alabama’s Gulf Coast beaches.

“People now more than ever need to be careful about observing six-foot distance, about wearing face coverings, about sanitation and hygiene. All those are more important than they’ve ever been because we have more people out doing more things,” Harris said.

Dr. Rachael Lee, an epidemiologist with the University of Alabama at Birmingham, said the increase is concerning and likely can be attributed to a combination of more testing and “having more people open and out and around.”

“This increase that we’re seeing is concerning to me and part of that may be due to relaxing some restrictions. Part of it may be not wearing masks in public or having larger events, which is what we would be concerned about for Memorial Day weekend.” Lee said at a news conference.

Similarly, Tuscaloosa Mayor Walt Maddox pleaded with people to remain vigilant as coronavirus hospitalizations in his city begin to rise.

For most people, the new coronavirus causes mild or moderate symptoms, such as fever and cough that clear up within weeks. For some, especially older adults and those with existing health problems, it can cause more severe illness and be fatal.

In an effort to protect the health and safety of the community, the Troy Parks and Recreation Department summer baseball... read more