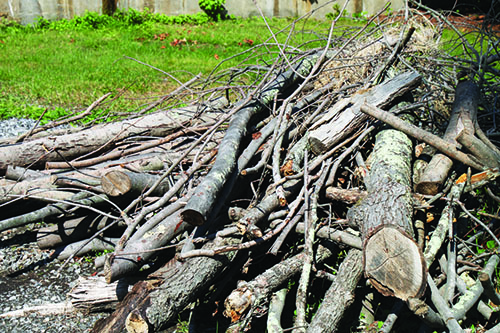 “We made a promise to the residents of Pike County … and now we’ve got to pick it up.”

That’s how Pike County Commissioner Russell Johnson summed up the dilemma of storm debris facing commissioners during their called meeting on Wednesday afternoon.

The commissioners were meeting to review project bids and to address the pressing issue of cleanup from the April 19 storms that brought 95 mph winds and left a swath of damage and debris across the county.

Commissioners approved $100,000 on May 11 to be used to pay a contractor to clear debris from the rights of way and public areas throughout the county.

“That lasted eight days,” said County Engineer Russell Oliver. The contractor, whose rate was charged by the cubic yard, maxed out the commissioners’ commitment in eight days and completed about one-third of the debris removal needed in the county.

“We sent them away, and we’re trying to do what we can to clean it up … at this rate it will take us about six months,” Oliver told commissioners.

Oliver has estimated the total cost of the cleanup could be about $300,000.

Commissioner Charlie Harris expressed his frustration about the situation, saying “If I’d known he was going to pick up and charge by the cubic yard, I’d have been in favor of a little more money.”

At the time they approved the outsourcing of debris removal, commissioners allocated $100,000 from the lodging tax fund and authorized an additional $50,000 expenditure if the county received a disaster declaration, making it eligible to recoup at least 75 percent of the cleanup costs through FEMA.

However, that declaration has not yet been awarded. The state has met the $7.5 million threshold for seeking the declaration, but the request must be submitted to federal authorities for approval. A decision could take until mid-June.

“I’ve talked with Herb Reeves (Pike County EMA director) and the state and federal EMA representatives were here on Tuesday to review the cleanup and debris removal sites,” said McKenzie Wilson, county administrator. “We have a conference call (on Thursday) to review the information and hopefully it will move on from there.”

Meanwhile, commissioners had allowed county residents to move their vegetative storm debris to roadsides for removal, and the combination of that debris with the existing storm debris has created dangerous situations along the roadways.

“We were taking a shot that we were going to be able to hire the contractor and have him here long enough to get the declaration,” said Chad Copeland. “The problem we have right now is that we don’t have that declaration …

“We knew (the original allocation) wasn’t going to get it all, but we made a promise to the residents of Pike County to begin cleaning up and allowed them to bring the debris out of their yards and we’d clean it up. We haven’t been able to do that in a timely manner, and I hate that. Now we have to spend more money to get it done.”

In other business on Wednesday, commissioners rejected bids for a CDBG/EDA grant to resurface the north portion of County Road 7714 from Rex Lumber to Orion due to issues with the public notice of the bid request. The commission will republish the notices and solicit new bids.