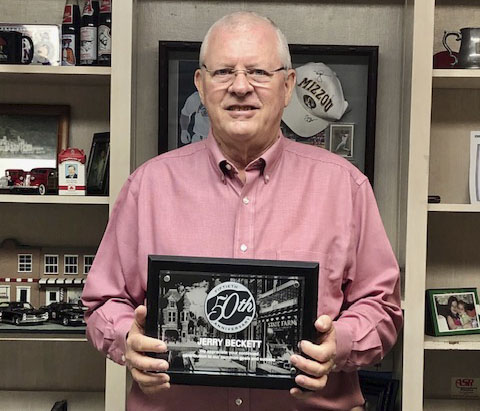 State Farm Insurance will celebrate its 100th anniversary in 2022. Jerry Beckett, State Farm Agent in Troy, has been with the insurance company for 50 of those years.

Beckett smiled at the thought of spending most of his career with the same company. Fifty years is a long time, he said, but a long time well spent.

On Friday, Beckett will close the door on his career with State Farm, express appreciation to his loyal staff, Missy Hayes, Pam Lambert and Christy Pittman, and hand the key over to Bryant Smith, the new State Farm agent in Troy.

“My staff has been with me for about 25 years so we’re like family,” Beckett said. “And, it’s that way with our policyholders; they are friends and neighbors. We’ve been together a long time.”
Beckett admitted that growing up on a farm is Missouri, he didn’t have any idea he would leave the “Show Me” state to sale insurance in the “Yellowhammer State.”

When he graduated from “Mizzou” in 1968, Beckett worked for an oil company but, when the company merged, he went job hunting and applied for a job with State Farm Insurance and that set the course for a lifetime career.

He stated working “in insurance” in Missouri, in January 1970 and has never considered doing anything else – until retirement.

“State Farm is a good company; they treat their employees well and there are opportunities for promotion,” Beckett said. “With State Farm, I had the opportunity to become an independent contractor. For me, to be a State Farm agent, was and is very important.”

Beckett said he will miss the day-to-day contact with people but he is looking forward to having some time on his hands for family, travel and for doing some of the things that he just wants to do.

A family trip to Ireland in June would have been a great start to Beckett’s retirement but COVID-19 has put that on hold. So, the Becketts might have to opt for a trip to Key West on his 64 ½ Mustang convertible.

Beckett, laughingly, said he has many plans to keep his Mustang on the road during his retirement years. He also enjoys hunting and looks forward to pheasant-hunting trips in Iowa with a bunch of buddies. He also enjoys quail hunting.

But most of all, he is looking forward to the time he and his wife will be able to spend with their children and grandchildren.

Their daughter Erin Duce is a college history professor in Winter Haven, Florida and their son, Lee, is a retired – before his dad -engineer in Sugarland, Texas.

The Becketts have four grandchildren to put icing on his retirement.

The Pike County Memorial Day  Blowout Steer and Heifer Show at Cattlemen Park Saturday was an event that might not... read more