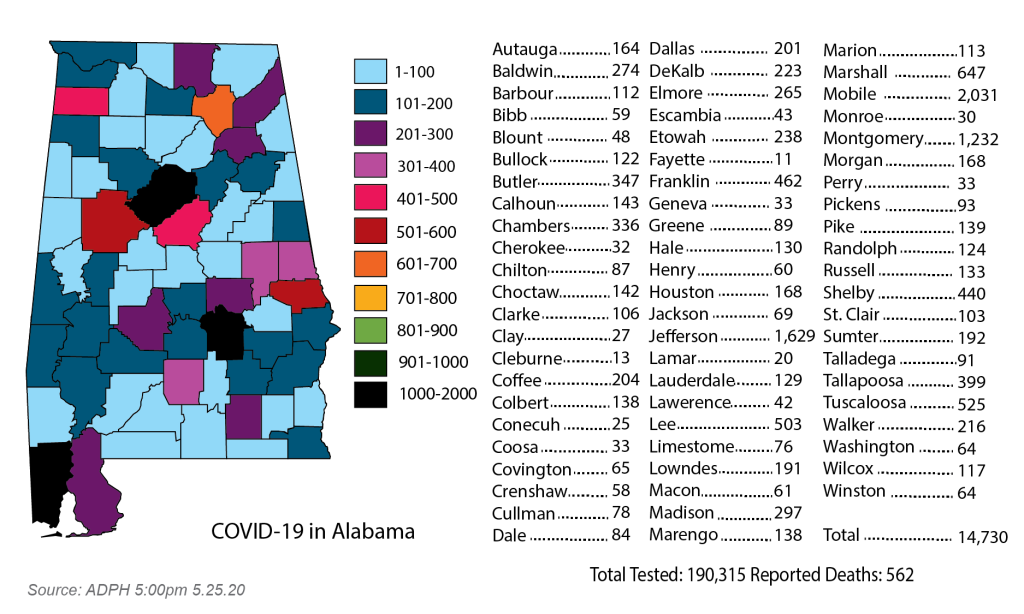 Although Memorial Day celebrations were cancelled or toned down in Pike County and statewide, the lifting of restrictions drew thousands of revelers to lakes, beaches and backyard barbecues over the Memorial Day holiday weekend.

Alabama’s death toll from the coronavirus climbed to at least 560 on Monday, according to data from the state Department of Public Health.

There have been over 14,730 confirmed cases of the virus statewide. More than 4,580 cases have been reported within the last 14 days.

In Pike County, confirmed cases totaled 139 with no deaths as of 5 p.m. Monday, an increase of 9 percent from the 126 reported by Friday.

New rules from Gov. Kay Ivey also went into effect Friday at 5 p.m. allowing entertainment venues like bowling alleys, arcades and theaters as well as child care facilities to reopen subject to social-distancing and sanitation rules. Youth sports practices have also been allowed to resume, though competition won’t begin until June 15, and summer camps are now allowed to open.

The disease that has infected 5.4 million people worldwide and killed over 345,000, including nearly 100,000 Americans, according to a tally by Johns Hopkins University.

For most, the coronavirus causes mild or moderate symptoms. For some, especially older adults and people with existing health problems, it can cause more severe illness, including pneumonia, and death.

The changes come as a recent Associated Press analysis of testing data from The COVID Tracking Project showed the situation in Alabama worsening. The data analyzed included counts through May 20. During the 14 days prior, the number of new daily cases rose while the positivity rate of tests increased.