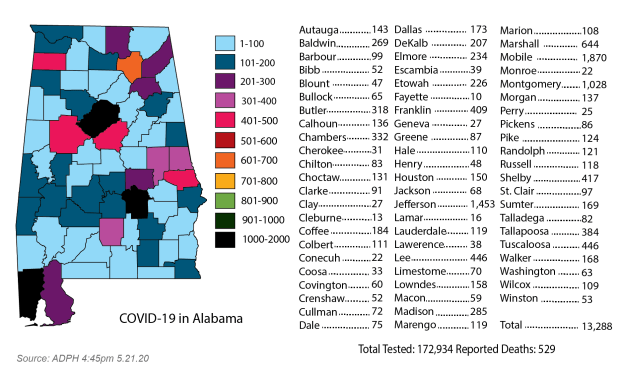 Alabama will revive more of its economy by letting entertainment venues, athletics and schools reopen Friday afternoon despite shaky progress in taming the coronavirus pandemic.

The announcement came as the state recorded more than 13,285 cases of COVID-19 with nearly 530 deaths. In Pike County, COVID-19 cases climbed to 124 on Thursday.

Ivey acknowledged the state health officer’s assessment that “our numbers are not as good as we would hope” and that there are areas including Montgomery where a large number of hospitalizations is a concern.

“Today, however, is the next step in what has seemed like a long and difficult process of reopening our economy while at the same time remaining true to the belief, the fact, that y’all, this is a serious, deadly disease,” she said.

“Having a life means having a livelihood as well,” Ivey told a Capitol news conference. “You have to have a balance.”

“Today Governor Ivey took another step toward returning Alabama back to normal,” said Allen. “Although the Wuhan Virus is still something we should all do our best to protect ourselves and our loved ones from, we must live our lives fully again. Wash your hands, social distance and use common sense. Those three things will be the best protection you have from the Wuhan virus and only you can do those things. The government cannot and should not do those things for you.

“As we move forward and eventually get past this, we must never forget that Communist China is to blame for this health crisis.  We must take any and all measures to eliminate the impact and influence that the Communist Chinese have on our society.”

The changes came as an Associated Press analysis of testing data from The COVID Tracking Project showed that, over the past 14 days, the situation in Alabama has gotten worse. New daily cases have risen to 304 from 268, and the positivity rate of daily tests has increased from 6.7% to 7.6%. The AP used seven-day rolling averages to account for daily variability in the testing data. The data includes counts through May 20th.

Dr. Scott Harris, the state health officer, said the rate of positive tests in the state has decreased by the state’s count. He added, however, that people are still “safer at home” despite the loosened restrictions.

Pike County Commission Chairman Robin Sullivan said, speaking on the side of caution, it is important to remain vigilant. “We still need to keep safe distances,” he said. “We can’t be too careful.  We need to wear masks and gloves if that makes us feel comfortable.

“I’m glad to see the daycares reopen so people can get back to work. As for movie theaters, I’ll go when there’s not a crowd,

Sullivan said he’s glad the kids can get back playing sports. “But, we need to remember that the virus is still out there and it’s dangerous. We cannot take it lightly so need to take every precaution.”

Dixie Shehane is all for the re-opening of the movie theaters.  ‘It’s great,” she said. “I went to the movie with friends when COVID-19 first stated. The theater was clean and fresh smelling. We sat every other seat. I don’t see that going to the movie theater is any different from riding in a car with others or going to Walmart.”

However, Shehane said everyone needs to be cautious.

“Don’t go out in public if you’re not feeling well and practice social distancing,” she said. “Wash your hands; wear a mask if you feel more comfortable.  But we can’t stop living.”

“We need to get out for our mental health…. and our small businesses need us.”

The new, loosened rules were announced hours after the state said claims for unemployment compensation during the coronavirus pandemic have topped 500,000 in Alabama.

The state Department of Labor said 25,150 initial jobless claims were filed last week, bringing the state total since mid-March to a record 501,630. The applications from last week were the lowest since late March and continued an overall downward trend as parts of Alabama’s economy reopen.

The state said about 64% of the unemployment applications from last week were related to COVID-19, the disease caused by the new coronavirus. Jefferson County, the state’s most populous area, had the largest number of claims with 3,715.

Statewide, 2,563 claims were filed by people who worked in administrative and support services, followed by 2,074 claims from displaced restaurant and bar workers.

The state economy will get another boost next week as the Army’s Redstone Arsenal begins reopening in Huntsville. The garrison commander, Col. Kelsey Smith, described the move as a “first step toward recovery” that was being taken after cases declined for five consecutive days in the 16-county region where base employees live.

“I’m not saying we should all get excited,” Smith said in an announcement made on Facebook. “We are far from through this.”

Building capacities will be limited to make social distancing easier on the base, where about 40,000 people work, and increased cleaning is planned, he said.

More than 13,100 people have tested positive for the coronavirus in the state, and 529 people have died. Most people recover from COVID-19, but people with other health problems and the elderly are particularly susceptible.

By Lauren Johnson “This is not the graduation that we expected, but we will forever remember this,” said Charles Henderson... read more