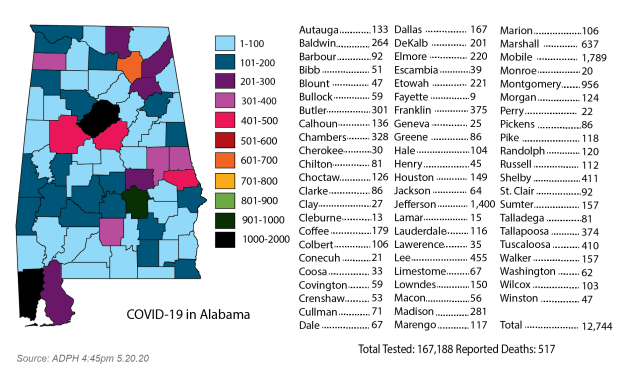 Pike County has seen a 16.8 percent increase in confirmed COVID-19 cases during the past week.

“More people are definitely sick and the jumps is positive cases is reflective of that,” said Amy Minor, chief clinical officer at Troy Regional Medical Center.

Statewide, more than 12,740 cases have been confirmed with 517 confirmed deaths and.1,498 hospitalizations since March 13.

Minor said the volume of testing continues to increase this week at the hospital. “More people are symptomatic and meeting test criteria,” she said. “Results are still taking three to five days, and sometimes longer. I’m sure test volume is rising at other collection sites as well.”

Alabama has added as many as 350 new cases per day in the past two weeks, and the state’s average number of new cases has continued to climb since Gov. Kay Ivey lifted a stay-at-home order on April 30.

She further lifted restrictions on May 11, allowing restaurants, salons and gyms to reopen. The current order expires Friday.

Now, with high school graduation ceremonies taking place, some medical experts are warning a new spike in cases could been seen.

Dr. Michael Saag, who treats infectious diseases at the University of Alabama at Birmingham, said the threat of spreading the coronavirus poses too great a risk to hold such ceremonies. Virus carriers without symptoms could unknowingly infect others, he said.

Saag has a special perspective: He survived COVID-19 after being infected in March.

“Having had this before, even if you survive it, which most people do, it’s still a pretty harrowing thing to go through,” said Saag, now back at work.

Alabama State Health Officer Scott Harris said it could take up to three weeks to judge if cases are on the rise because it can take up to two weeks from exposure for a person to develop symptoms and several more days for the symptoms to become severe enough that a person seeks medical care. Test results can take several days after that.

Harris also said the state’s numbers are “not as good as we could hope for” as outbreaks continue in certain counties, including Butler, Mobile, Marshall and Franklin.

However, Harris said he believes the state is now meeting the White House criteria to proceed to an initial reopening by having a downward trajectory for two weeks in the percentage of positive tests.

“But that may not apply to every single county,” Harris said on Tuesday.

‘The hour of graduation has come’: GHS starts two-day process

Graduation ceremonies began for the 76 members of the Goshen High School Class of 2020 on Thursday morning at the... read more