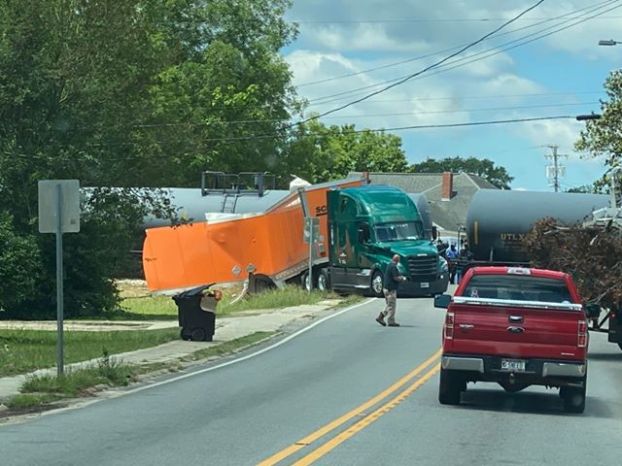 SUBMITTED PHOTO/CHASE FLOWERS A collision between a train and an 18-wheeler took place in Brundidge on Wednesday.

A collision between a train and a tractor/trailer truck occurred around 11 a.m. Tuesday at the railroad crossing on Highway 10 east in Brundidge.

Brundidge Police Chief Moses Davenport said the distribution truck had just left the Walmart Distribution Center and was traveling eastbound along Highway 10 when the accident occurred.

The truck trailer was split in half by the impact, the chief said. However, the truck tractor was not damaged. There were no injuries.

“The driver of the truck drove it back to Georgia,” Davenport said.

“The driver of the truck said the railroad crossing light was not blinking. But the CSX technician said it was. The train crossing has lights but no arms.”

The truck was empty but the train was carrying about 60 cars.

Davenport said the track was cleared and the highway opened about 4:30 p.m.

“This was the third accident we’ve had at that crossing in less than a year,” Davenport said. “Two involved an 18-wheeler and one an automobile.