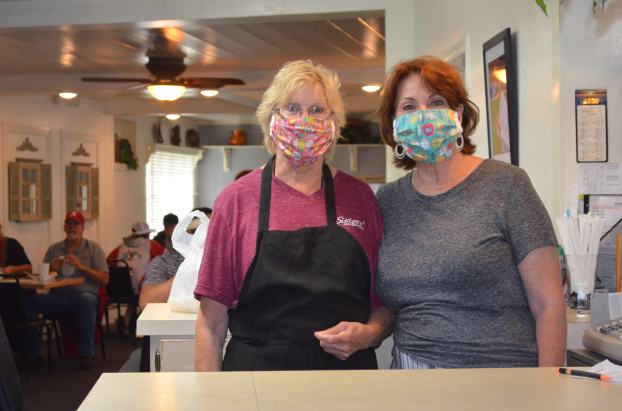 Photo/Jaine Treadwell Pat Rogers and her sister, Geraldine Golden, reopened Sisters Restaurant on Monday with little fanfare. The restaurant traditionally featured a buffet, but cannot do so under the state health guidelines.

‘All we could do was open and see what happened’

The doors of two popular Pike County restaurants, Julia’s and Sisters, opened at noon Monday with little pomp and circumstance and with some degree of uncertainty.

“That meant we could not operate our restaurant as we had been doing so, if we opened, we would have to completely change the way we ran our business, Bo Lankford said. “And, having to operate at 50 percent capacity, we had to decide if we could run the business successfully that way.”

Pat Rogers said she and her sister had the same concerns.

“When we opened 23 years ago, we had menus and we realized we might have to go back to that,” Rogers said. “But, we didn’t know how that would work or if it would work. But we knew we had to get Sisters open again or just close the door and go home.”

Lankford said Julia’s was in the same situation. The choice was open and find a way to make it work or close.

On Monday, the restaurant owners opened their doors with not a lot of fanfare and hype.

The Lankfords called it a soft opening. The sisters just said, “Hallelujah!”

“We didn’t know if people would come and, if they did, what would be their response to ordering from the menu,” Lankford said. “All we could do was open and see what happened.”

The owners of Julia’s and Sisters were a little apprehensive prior to opening their doors Monday but were pleased and encouraged by the response.

The employees wore masks as did many of the customers until food was served. The tables were spaced six feet apart and the restaurants were at 50 percent capacity.

The diners said they felt comfortable and were glad to be able to get a home-cooked meal that was much better “than what I’m cooking at home,” Jenny Gilmore said laughing.

Joe and Joan Wilson said they were comfortable in that all precautions are being taken for the safety of the customers.

As for the buffet or from the menu, Joe Wilson said the food is good either way.

Dr. Rick Gill was among those who took advantage of dining in at Sisters and he did so without reservation.

“If we do the things that are recommended to us, we can be deemed as safe as possible from the risk of exposure.”