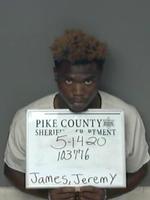 A Brundidge man was charged Thursday with capital murder in the stabbing death of a Troy woman earlier this week.

James is  charged in the death of Whitney Blair Sanders, 29, who was found at her home on Glenwood Avenue on Wednesday after a welfare check.

“Mr. James and Ms. Sanders were acquaintances,” said District Attorney Tom Anderson. “Actually, some time ago she had filed a felony theft complaint against him but did not follow through.”

Anderson said on Tuesday James began walking from Brundidge to Troy, catching a ride along the way. “He made his way to Glenwood Avenue, where he forced his way into her home – she actually tried to stop him at the door,” Anderson said. “He then proceeded to stab her several times before stealing several items.”

According to court records, James took money, food and a vehicle from Sanders’ residence.

The incident took place on Tuesday but was not discovered until Wednesday, when police officers were called for a welfare check at the home.

“Ms. Sanders actually had a scheduled appointment that she did not make, and that person became concerned and alerted authorities,” Anderson said.

Officers arrived at the scene shortly after 10:30 a.m. and James was in custody by Wednesday evening.

“I want to commend every single person, detective and otherwise, at the Troy Police Department,” Anderson said. “They got out there, toiled and labored and solved this quickly.”

Anderson said James will have an arraignment within 72 hours of his arrest. “We’re going to ask that he be held without bond,” Anderson said.

Troy Police have arrested a suspect in connection with a woman found dead Wednesday at her residence. Police were called... read more