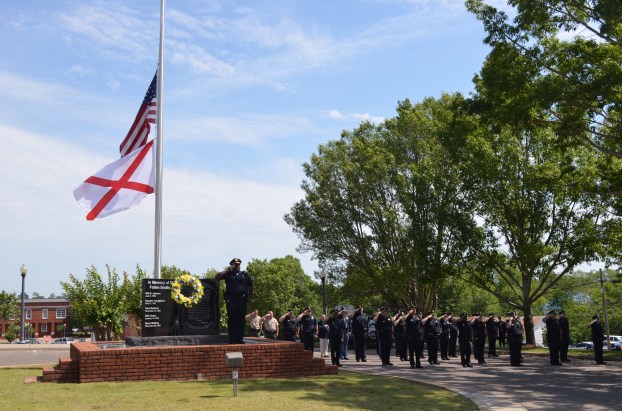 The Roll Call of Honor at Bicentennial Park was for the fallen members of the Troy Police Department and R.W. “Bob” Jones, State Trooper, November 3, 1991, and Grady R. Jackson, Conservation Officer, February 12, 1984.

Captain Danny Barron said it is the rightful to honor and to remember the fall heroes and the supreme sacrifices they made and the sacrifices of the families they left behind.

“These officers never took their jobs for granted,” Barron said. “They served with integrity and courage and with a servant’s heart.”

Troy Mayor Jason A. Reeves said Troy Police Memorial Day is a difficult day because it is a reminder of the lives lost and the continuing possibility of losing lives in service to others.

“A community is created for convenience but public safety is its main purpose,” Reeves told the honored officers.  “And it all rests on the shoulders on the foundation you provide.”

Reeves expressed to the officers that the city’s leadership and the entire Troy community deeply and honesty appreciate what they do.

The mayor said, the city’s leadership also understands the heartbreak the families of the fall heroes have endured.

“Those whose names who have been called did not die in vain,” he said. “They died in service to others. We will not let them be forgotten.

In speaking to the members of the Troy Police Department, the mayor quoted Matthew 20:28: Just as the Son of Man did not come to be served, but to serve, and to give his life as a ransom for many, “so have you.”

“And we honor you and those who have gone before,” he said.