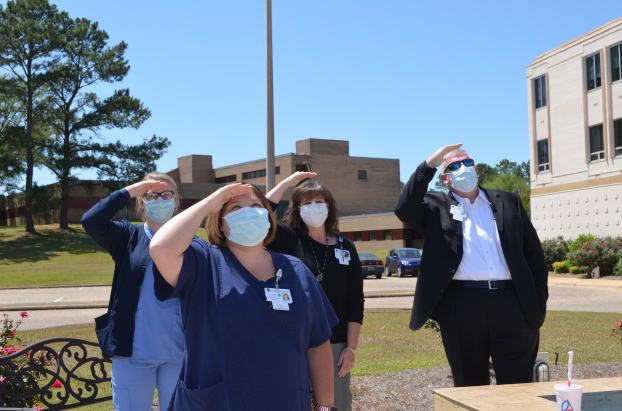 The two-ship formation was scheduled to fly over Troy and nine other Alabama cities on Tuesday in order to honor the frontline heroes in the COVID-19 response.

Rick Smith, TRMC chief executive officer, said he and his staff are honored to have been selected as one of the 10 hospitals for the flyover.

“The 908th Airlift Wing honors us every day with their service and we grateful to them for honoring TRMC and the nine other Alabama hospitals,” Smith said. “To be honored with the flyover by the C-130 Hercules aircraft was greatly appreciated.”

Amy Minor, TRMC chief clinical officer, said, too, that the flyover was a tremendous honor.

“We thank the 908th Airlift Wing for recognizing our staff for their response to COVID-19 and for what they do every day here at TRMC,” Minor said.

The 908th Airlift Wing is stationed at Maxwell Air Force Base in Montgomery and conducts “Hercs Over Alabama Salutes to Heroes.”

“We wanted to show our support for all of the great Alabamians doing everything they can in this fight against COVID-19,” said Col. Craig Drescher, commander of the 908th Airlift Wing. “We continue to hear all these amazing stories of people stepping up and going above and beyond their civic duty and we wanted to find a way to say thank you.”

Drescher said the best way for the 908th to say thank you was to find a way to incorporate the thank you into already scheduled training missions.

“We have members from all over the state, so we wanted to find a way to say thank you to the state and not just our home base city of Montgomery,” said Drescher.

‘Everything from cuts to curls’: Beauty shops, barbers reopen