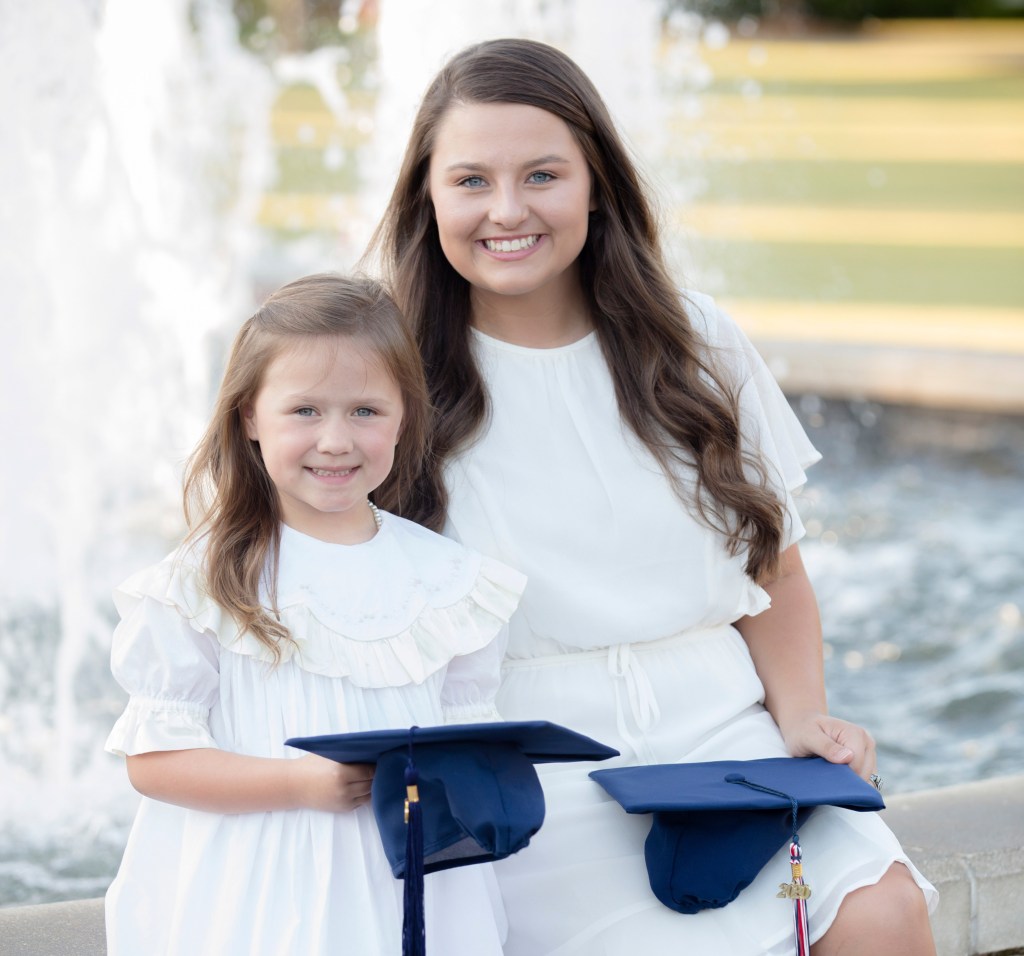 The day that Aubrey Maulden entered kindergarten, her mom, Charity Earles Maulden had a sinking feeling in her stomach. Not that her first little girl was going off to school, but that one day, far too soon, her little girl would be graduating from high school and leaving home.

That day is now. And, Charity’s sinking feeling is just as strong. Maybe even stronger.

Not only will Aubrey be graduating from Pike Liberal Arts School and leaving home, but her youngest sister, Charlee, will be going from PLAS kindergarten to “big school” and the strong bond between the oldest and youngest sisters will be stretched across the miles.

All four Maulden sisters are close but the bond between the oldest and youngest is the strongest, and perhaps, the most fragile, their mom said.

“Aubrey and Charlee are especially close and the separation is going to be difficult for both of them,” Charity said. “The way the school year ended for both of them has been disappointing. Probably, more for David and me as parents than for Charlee, but more difficult for  Aubrey because her Pike Liberal Arts Class of 2020 has missed so many senior activities and traditions that they have looked forward to for so long.”

Sweet, sassy and smart-as -a-whip, Charlee said she misses her kindergarten school friends and her teacher that she loves.

“I miss going to centers and getting to play with my friends and have fun,” Charlee said. However, her mom is disappointed that Charlee is missing that time with her friends and her teacher and that she will miss the excitement that comes with moving from kindergarten to “real school.”

For Aubrey, there is the disappointment of a halted senior softball season and missing the prom, class day, honors day and graduation.

However, the changes brought about by COVID-19 have also been a blessing for David and Chasity Maulden and their four daughters, Aubrey, Bella, Addi-Grace and Charlee.

“Being out of school and at home, we have had more family time and that has been a blessing,” Charity said. “We have been able to go fishing, play board games and do so many other things that we would not have had time to do. All the  girls play softball and we really missed that, too, but we treasure our time together.”

Aubrey has signed a softball scholarship with Lurleen B. Wallace Community College in Andalusia and will be moving in early August. Her mom said that will be a bittersweet time for the family.

“We are happy and excited for Aubrey but we will miss her terribly,”  Chasity said. “But, Andalusia is not that far so we will see her often.”

As for most all parents, one of the hardest times is when their first-born leaves home. No matter how bright the road they will travel, there is an emptiness in the nest.

Aubrey’s mom describes her as sweet and caring and very spiritual.

“Aubrey is understanding, caring and loving and so very special,” her mom said.

Charity remembers a time when Aubrey’s kindergarten teacher was going through some very difficult times.

“Her teacher  told me she was standing in the middle of the classroom with her eyes closed praying for some relief from what she was going through,” Charity said. “She said she felt two little arms reach around her. Aubrey looked up at her and said, ‘I love you and God loves you’ and she smiled.’ That was the answer to her teacher’s prayer.”

For Aubrey, that was the green light to go ahead and life her life. She placed her trust in God and His plan for her.

“In the back of my head there is the thought that something might happen again but I don’t dwell on it,” Aubrey said.

“I put all my trust in God and I have the support of my family and friends and I am so grateful for my life.”

And, it’s Aubrey’s love of sports, combined with the medical issues in her life that are charting the path that her life might take.

“I have thought about an athletic trainer or teacher but I’m seriously considering the medical field because of the health problems that I have had,” Aubrey said. “God has plans for me. I’m sure of that.”

“Charlee and I are very close, maybe because I’m the oldest and she’s the youngest,” Aubrey said.

“We sleep together and do fun things together. She is my best friend and I’m her best friend. I’m really going to miss her. I will miss being there to see her grow up a little every day. But, I’m thankful for my family and the closeness that we have and for the miracle in my life that has given me the opportunity to go to college and play sports.

For the David and Charity Maulden family, life is a blessing. Graduation for Aubrey and for little Charlee is not an ending but the beginning of what is yet to be.