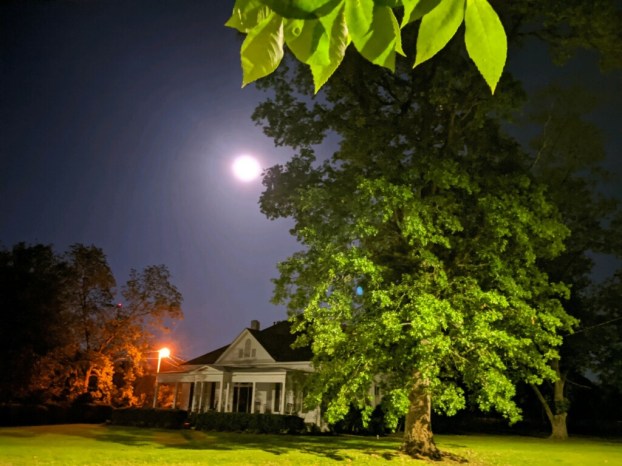 Supermoon sends eyes to they sky

The early risers who braved the 5:45 a.m. morning chill Thursday, perhaps, got the best first and best view of the May 7 supermoon.

Others among us had to wait until the sun went down. However, those who missed the supermoon show on Thursday may still catch it tonight and that will be the last supermoon show of 2020.

Dr. Maurice Clark, Troy University professor, said a supermoon is a full moon or a new moon that nearly coincides with perigee—the closest that the Moon comes to the Earth in its elliptic orbit—resulting in a slightly larger-than-usual apparent size of the lunar disk as viewed from Earth.

Specifically, Algonquin tribes referred to this moon as the flower moon in North America.

Clark said the Moon passes through perigee once each month, and when perigee coincides with the full moon, that is called a “supermoon,” because since it is slightly closer than average, it will be slightly brighter.

“However, the difference is so slight it is hardly noticeable,’ Clark said. “Last month’s full moon looked just like any other even though it occurred close to perigee. Tonight’s full moon will be just the same.”

Clark said, from an astronomical point of view, there is no significance in a “supermoon”

“Supermoons happen once or twice each year,” Clark said. “However, if publicity about it encourages people to head outside and look up at the sky, then I am all for it.”

Pike Liberal Arts Patriots kicker Scott Taylor Renfroe was surprised to find out he was ranked among the nations best... read more