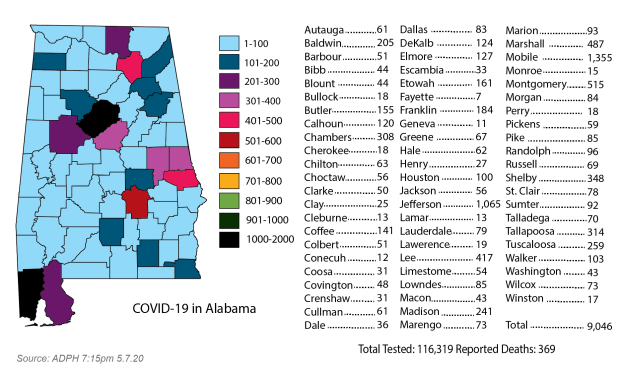 More than 9,000 confirmed cases of COVID-19 have now been reported in Alabama.

As of 6 p.m. Thursday, the Alabama Department of Public Health reported 9,046 confirmed cases in the state, with 85 of those in Pike County.

Across the state more than 369 COVID-19 related deaths have been reported, with no deaths reported in Pike County.

Thursday also marked the first full week the “Safer at Home” health order that allows the reopening of Alabama’s beaches and retail establishments, at 50% capacity, and the resumption of elective and non-emergency medical procedures. Restaurants remain closed for in-person dining and groups of more than 10 people are still prohibited. The order is in place through May 15.

Many governors across the U.S. are disregarding or creatively interpreting White House guidelines in easing their states’ lockdowns and letting businesses reopen, an Associated Press analysis found.

The AP determined that 17 states do not appear to meet one of the key benchmarks set by the White House for loosening up — a 14-day downward trajectory in new cases or infection rates. Many of those have begun to reopen or are about to do so, including Alabama, Kentucky, Maine, Mississippi, Missouri, Nebraska, Ohio, Oklahoma, Tennessee and Utah.

Because of the broad way in which the nonbinding guidelines are written, other states, including Georgia, have technically managed to meet the criteria and reopen despite not seeing a steady decline in cases and deaths.

Asked at the White House on Thursday about states that are reopening without meeting some of the federal government’s benchmarks, President Donald Trump said: “The governors have great power as to that, given by us. We want them to do that. We rely on them. We trust them. And hopefully they are making the right decisions.”

The push to reopen across the country comes amid pressure from businesses that are collapsing by the day and workers who have been thrown out of a job. Over 33 million Americans have applied for unemployment benefits over the past seven weeks, and a highly anticipated report on Friday is expected to show U.S. unemployment as high as 16%, a level not seen since the Depression.

Supermoon sends eyes to they sky

The early risers who braved the 5:45 a.m. morning chill Thursday, perhaps, got the best first and best view of... read more